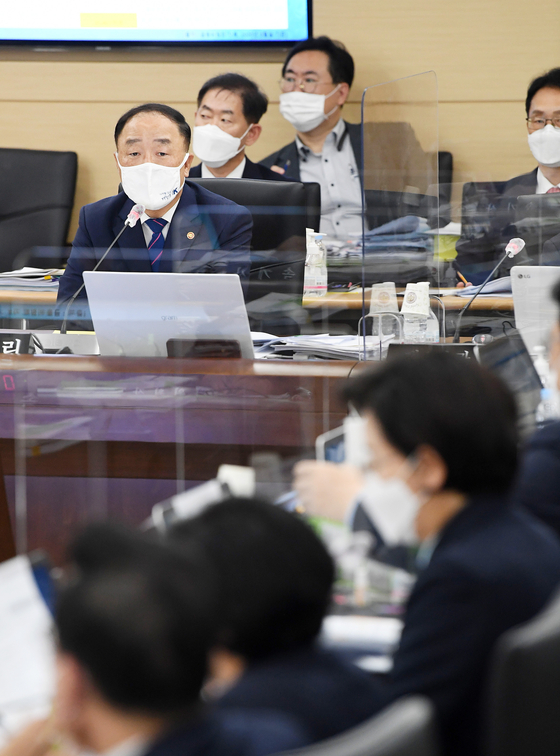 
In a rare divergence, the ruling Democratic Party (DP) is at odds with the government over a rule that would limit government spending and borrowing.

During a National Assembly audit of the Finance Ministry on Wednesday, the ruling party questioned the motive of the government in announcing a new fiscal rule at a time the country is facing an unprecedented economic crisis caused by the coronavirus.

“It would be best if Covid-19 would end soon, but we’re not sure what will happen [in the future],” said DP lawmaker Chung Il-young during the audit. “Under such abnormal circumstances, why [is the government] pushing for a fiscal rule?”

DP lawmaker Hong Ihk-pyo argued that it was dangerous to emphasize fiscal restraint at the current time.

“What we should be worried about is economic stagnation continuing,” Hong said.

In response, Finance Minister Hong Nam-ki said the fiscal rule is necessary due to the significantly increased spending used to counter the coronavirus pandemic.

“Advanced economies have adopted fiscal rules in time of crisis and reaped their results,” Hong said.

Hong said he disagreed with the argument that the national debt was rising at an acceptable rate.

“[One] cannot describe the increase in national debt as mild, and for that reason a fiscal rule is necessary,” Hong said. “As [the fiscal rule] could hinder the role of fiscal stimulus [to counter Covid-19], we have given a grace period and also included strict exceptions.”

The government on Monday announced that it will adopt a fiscal rule that would limit the national debt-to-GDP to 60 percent.

Although it is not currently a rule, for years Korean governments have tried limiting the debt ratio to 40 percent of GDP.

This was considered necessary for fiscal soundness.

With aggressive spending to counter the outbreak, including four supplementary budgets, Korea’s debt-to-GDP ratio for this year is expected to break the 40 percent barrier for the first time and reach a record 43.9 percent.

Finance Minister Hong estimated that by 2022 the national debt ratio will exceed 50 percent, and by 2024 be 58.6 percent.

While there have been several disagreements between the ruling party and Finance Minister Hong on supplementary budgets and other issues, the differences were patched up relatively quickly.

The main opposition People Power Party attacked Finance Minister Hong, asking why the government was not sticking to the 40 percent ceiling.

During the audit, Finance Minister Hong also said the government is looking into the possibility of relaxing rules on taxing profits on stock investments, which will be applied in 2023.


Hong said the government will continue with its plan to tax stock investment profits, but may relax some of the conditions.

In late June and July, the government announced it will be taxing profits exceeding 50 million won ($43,000) on stock investments at a rate of 20 percent starting in 2023.

However, investors with more than 300 million won in a single stock will have to pay taxes when profiting from sales starting April next year.

There have been growing concerns that the tax could negatively affect the stock market, which has sharply bounced back after tumbling to its lowest point in 11 years in March.

Stock market's biggest winner could be the government