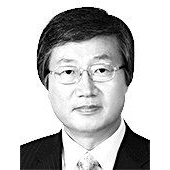 The author is a professor at the Chung-Ang University Graduate School of Public Administration and former head of the National Assembly Budget Office.


The key to Korea’s amazing economic growth can be found in Koreans’ diligence, competitiveness and desire for better lives. But the government’s fiscal policy also played a big part in its advancement. Budget is not only a major source of fiscal resources and services needed to ensure a state’s survival, but also determines the fate of a nation.

But concerns are growing over the government’s tendency to resort to fiscal expansion whenever the need arises. That populist approach shakes the fundamental role of fiscal policy in running the country. As a result, controversy endlessly erupts over a lack of principles and fairness in doling out emergency relief to help citizens overcome the pandemic. Another concern was raised about the government’s recent exemption of the required preliminary feasibility study for massive infrastructure projects such as the construction of an airport on Gadeok Island off Busan ahead of the April 7 mayoral by-elections in Busan and Seoul.

The preliminary feasibility study was introduced in 1999 to prevent original budgets for national infrastructure projects from snowballing. But only 63.5 percent of national projects passed the scrutiny of the test since it was introduced. Public concern about a waste of tax is deepening after the total amount of expenditures for national projects exempted from the feasibility study surged to 30 trillion won ($26.5 billion) in 2020 from 1.4 trillion won in 2015. 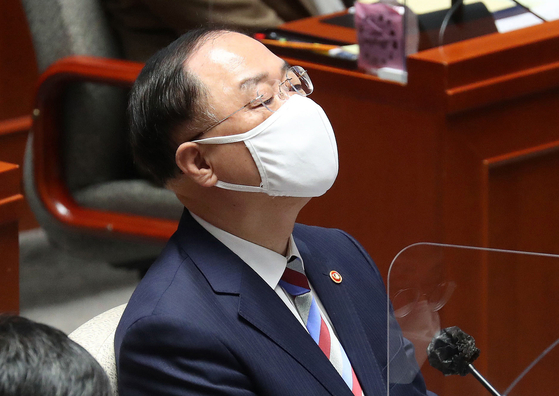 Finance Minister Hong Nam-ki on March 18 is deep in thought while listening to growing demand for fiscal input from lawmakers in the National Assembly. [AP/YONHAP]

Government budgets can be compared to a central nervous system of the public sector. Just as a patient can become brain-dead if their central nervous system is damaged, a nation can face a default if it is addicted to fiscal expansion. The government must not forget that. If it barely manages to run the country by issuing national debts (amounting to 965.9 trillion won as of now), national coffers will soon run out. How long can the government achieve “debt-financed growth” at the cost of the well-being of the future generation? Thomas Friedman once asked Americans, “Seriously, do you know anyone who says, ‘I couldn’t sleep last night. I was tossing and turning until dawn worrying that the national debt was now $14 trillion.’” His question reminds us of the graveness of national debt.

The need for the government to sacrifice some fiscal integrity amid an uphill battle against the coronavirus can be understood. But a national consensus is needed to decide whether to continue with deficit-ridden budget. A prescription primarily based on frequent injections of supplementary budgets to sustain the economy is not a solution. The government can find a breakthrough in strengthening its “fiscal muscle” applicable to new policy environments. If the fiscal muscle gets strong, the government can secure fiscal affordability sustainable after the pandemic, rekindle economic vitality, and push forward projects for future growth.

To achieve the goal, the government must first analyze the results of fiscal resource distribution on the macroeconomic level and redistribute fiscal resources based on the principle of selection and concentration. Second, the government must review the feasibility of budgeting and appropriateness of the size of budget from the zero base. Third, it must methodically remove all factors of budget waste for unnecessary spending.

The International Institute for Management Development in Switzerland linked a nation’s competitiveness to a desire to move to future prosperity while not being satisfied with the current situation. Only genuine fiscal reform can ratchet up Korea’s national competitiveness and ensure sustainable prosperity. Whether to take another leap forward or plunk down depends on how the government operates its fiscal policy. Fiscal solidity can serve as a breakwater for external shocks. That is key to our prosperity.