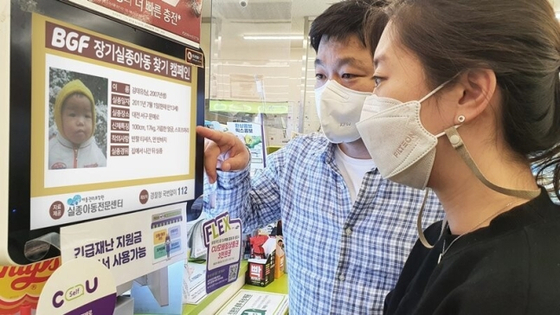 
A woman who went missing 20 years ago was recently reunited with her family thanks to a CU convenience store.

According to CU on Tuesday, 24-year-old Kang Young-hee, whose name has been changed to protect her identity, was able to find her family 20 years after she was reported missing through the missing children campaign the company has been running in partnership with the National Center for the Rights of the Child (NCRC).

Since June 2000, when Kang went missing, her family has been trying hard to find her. After years of effort, the family registered Kang’s name with the NCRC in August this year. Under the partnership with the NCRC, BGF Retail, operator of convenience store chain CU, displayed Kang’s photo and information on its roughly 14,000 point-of-sale screens at CU stores across the country.

Last week, Kang saw her photo on a screen when she visited a CU near her home. It was a month after the information began to be displayed.

According to Kang, she was raised in a shelter for missing children and didn’t know that her family was looking for her. When she first found out that her photo had been displayed at CU, she thought something went wrong and asked the NCRC to delete her information.

Kang was surprised to find out that she had a family that had been looking for her and was finally able to reunite with them after 20 years.

“It is very unusual that a person who went missing directly discovers the information, rather than through their guardian or acquaintances, and reunites with their family,” said Yoon Hye-mee, president of NCRC.

BGF Retail has signed a partnership with NCRC in 2018 and has been making continuous efforts to support families looking for missing people.