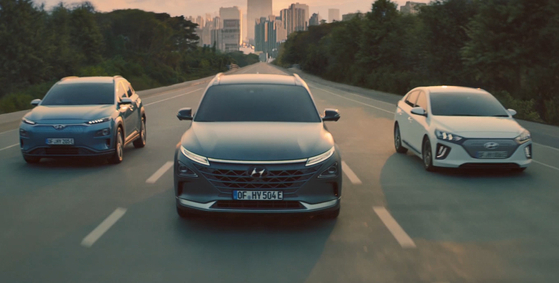 
The outbreak of the coronavirus sent jitters through industries across the world, and the automotive segment was no exception.

U.S. car sales in the first half dropped by 24 percent from the year before, and Germany, the biggest auto market in Europe, saw its car sales plunge by 35 percent during the cited period.

Korea, despite a strong tax subsidy from the government when buying a new car, recorded a mere 6.6 percent increase in car sales in the January-June period.

There was one segment, however, that bucked the trend: electric vehicles (EVs).

Sales of eco-friendly vehicles hit 90,000 units in the first half in Korea, a 29.7 percent on-year jump. The segment's share of the auto market accounted for 9.6 percent, an all-time high, while that of diesel shrank from 29.7 percent to 20.6 percent.

"Multiple elements factored into the sales of EVs in Korea, but the biggest would be people's improved awareness of eco-friendly vehicles. Also, new models boast pretty long driving ranges, and the infrastructure has improved a lot lately," said Lee Hang-gu, a senior researcher at Korea Institute for Industrial Economics & Trade.

"Those who thought about buying a car or changing their car would have opted for the EV option. The government's tax subsidy on new purchases of cars contributed in driving up demand as well."

The expanded eco-friendly lineup from imported carmakers played a major role in driving the growth of eco-friendly vehicles.

In terms of passenger cars, sales of pure electric vehicles from domestic carmakers dropped 42.6 percent, while those from imported carmakers jumped 150 percent in the first half on year.

Hybrid cars were especially strong. Hyundai Motor, the No. 1 carmaker in Korea by sales figures, recorded a 40.7 percent on-year jump in the first half of this year in selling hybrid models.

The Tesla lineup, represented by the Model 3 that sold nearly 10,000 units as of September, led the growth for imported carmakers, but new players like Audi's e-Tron, Peugeot's e-208 and e-2008, all of which launched here this year, contributed to the numbers.

On the back of such growth, experts expect next year will be a major turning point for the electric vehicle market globally.

"Hyundai and Kia are also launching their EV-dedicated platform E-GMP next year. Such a range of choices will keep pushing the EV market to grow exponentially."