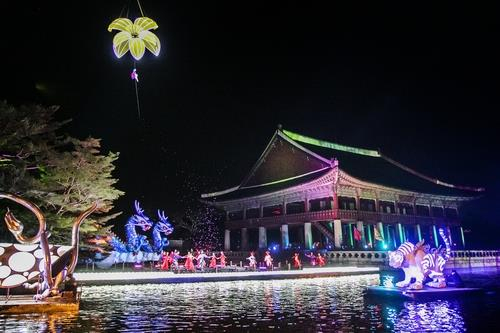 
A monthlong heritage festival that explores Korea's royal palaces and culture kicked off this weekend, with some of this year's events scheduled to be held online amid the new coronavirus, officials said Friday.

The sixth Royal Culture Festival will take place at Gyeongbok, Changdeok, Deoksu and Changgyeong palaces as well as at Jongmyo Shrine — all in central Seoul — from Oct. 10 to Nov. 8, according to the Cultural Heritage Administration and the Korea Cultural Heritage Foundation.

A performance that showcases different programs of the festival opened the event on Saturday. The opening performance was held at Gyeonghoeru in Gyeongbok Palace, an iconic pavilion where K-pop superstars BTS recently performed.

The first week of the festival will center on events held at the palaces, offering visitors a chance to explore Joseon Dynasty (1392-1910)-era heritage. Some programs include making oriental medicine-based tea bags or learning culinary traditions. 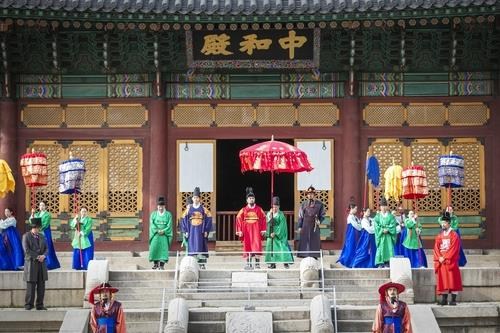 
The highlight of the week will be a media performance scheduled for Oct. 17, based on the folk story Shim Cheong that blends traditional dance and music with the latest lighting technologies, organizers said.

The remaining three weeks will focus more on virtual programs, such as streamings of exhibitions and performances held at the festival venues. Craft and food kits will also be available so that participants can enjoy the festival from their homes.

Tickets to some of the programs held at the palaces have to be reserved in advance at the festival website (www.royalculturefestival.org) or the ticket platform Auction.

All the palaces, which usually close once a week, will remain open in the first week of the festival, between Oct. 10 and 18.