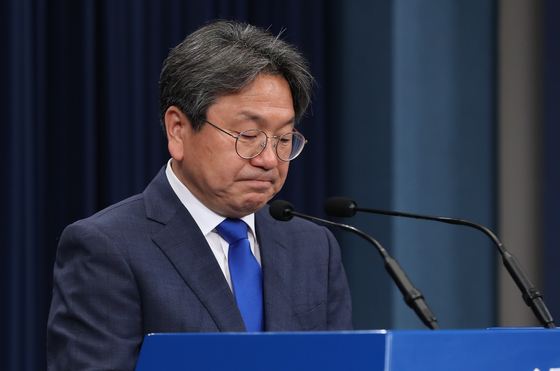 “Former Chairman [of Star Mobility] Kim Bong-hyun testified in a courtroom that he had given a bribe to former senior presidential secretary for political affairs Kang Ki-jung,” Rep. Kim Eun-hye, spokeswoman for the People Power Party (PPP), said in a Sunday statement. “His account was specific enough that it cannot be a lie.”

On Thursday, Kim took the witness stand in the trial of his co-conspirator Lee Kang-se, a journalist hired as Star Mobility CEO to lobby the government, and testified that he had paid 50 million won ($44,000) to Kang through Lee in July last year. Kang was Moon's senior secretary for political affairs from January 2019 till August 2020. 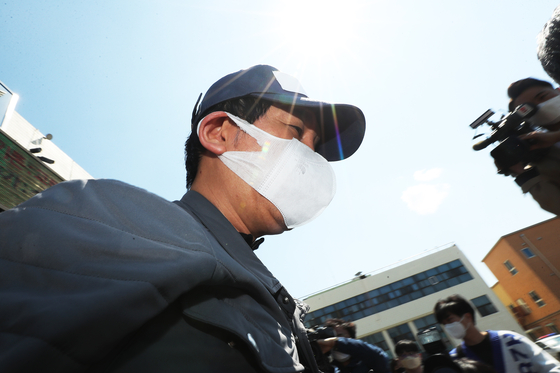 In this file photo, Kim Bong-hyun, former chairman of Star Mobility and a key suspect in the financial fraud scandal surrounding Lime Asset Management, leaves a police building in Suwon, Gyeonggi, on April 26, 2020, to attend a warrant hearing. YONHAP]


Kang has denied the testimony, calling it both perjury and defamation. Although Kim made no mention of President Moon,  Kang added, “This is a matter going beyond my personal reputation. I cannot allow them to stain the integrity of President Moon and our administration.”

PPP Rep. Kim on Sunday questioned the district prosecutors’ willingness to go after Kang. She suggested that prosecutors are uninterested in getting to the bottom of the Lime Asset Management scandal, because more powerful figures were involved in it.

After he was arrested in April, Kim Bong-hyun told the Seoul Southern Prosecutors’ Office about the alleged bribe to Kang, the JoongAng Ilbo reported, citing unnamed sources within the prosecution. The prosecutors did not investigate his statement.

The information linking a top presidential aide to the scandal was also never passed along to the Supreme Public Prosecutors’ Office, the newspaper reported. According to prosecution sources, Prosecutor General Yoon Seok-youl became aware of Kang’s alleged connection to Lime Asset Management only after Kim’s court testimony was reported by the media last week.

Yoon then ordered his aides to check why he was kept in the dark about Kim’s statement, and why Kang’s suspected link to the financial scandal was never investigated during the past months, the newspaper reported.

“We wonder why the prosecution is voluntarily scaling down the probe,” Rep. Kim said. “Why are the prosecutors so afraid of laying bare the truth? Their behavior fuels our curiosity about whose name will come up at the end of this corruption scandal.”

Another PPP spokeswoman criticized the prosecution for trying to conceal the suspicious connection between the massive financial scandal and the Moon administration.

“Kim Bong-hyun, a key suspect in the scandal, which led to about 1.6 trillion won losses for its investors, gave sworn testimony in a courtroom about Kang’s connection,” said Kim Ye-ryoung, spokeswoman of the PPP. “He also testified to the court that Kang, on behalf of him, made an appeal to Kim Sang-jo, policy chief of the Blue House, [to go easy on Lime Asset Management when the financial authorities investigate it].”

She said it is unbelievable that the prosecution would be working to conceal crimes allegedly committed by key members of the administration. Top members of the ruling Democratic Party, including Chairman Lee Nak-yon, were allegedly linked to another financial scandal, Optimus Asset Management.

Blue House aides were accused of having abused their power to influence the Ulsan mayoral election and shut down an audit into Moon’s ally, but the prosecution has no intentions to conduct proper investigations into the allegations, Kim said.

“The prosecution must conduct fair and meticulous investigations to convince the people,” she said. “If necessary, it must think about creating an independent team.”

A strange judgment by the court