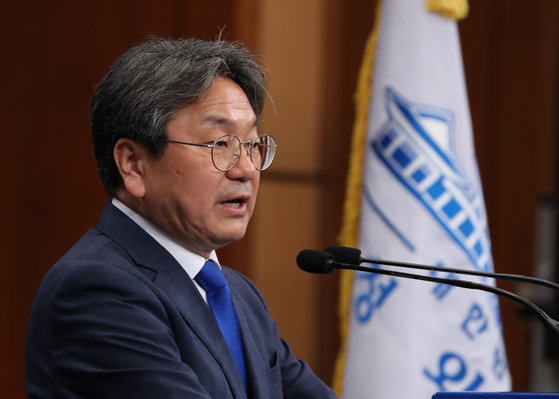 
A former political aide of President Moon Jae-in denied court testimony that he took a bribe in a massive financial scandal.

In a Facebook post, Kang Ki-jung, Moon's senior secretary for political affairs from January 2019 till August 2020, said he is planning legal action against Kim Bong-hyun, former chairman of Star Mobility and a primary suspect in a financial fraud that effectively brought down Korea's largest hedge fund, Lime Asset Management.

Kang said Kim’s testimony in a trial hearing on Thursday was both perjury and defaming of him.

On Thursday, Kim took the witness stand in a trial of Lee Kang-se, a journalist hired as Star Mobility CEO to lobby the government, who is being tried for bribery and embezzlement. Kim testified that he had paid 50 million won ($44,000) to Kang through Lee.

“In July last year, Lee said he would make the delivery to Kang, who was the senior presidential secretary for political affairs at the time,” Kim testified. “I put 50 million won [in cash] inside a shopping bag and gave it to Lee. Lee said his meeting went well, so I took it that the bribe had been delivered smoothly.”

Although Kim said Thursday that he had bribed Kang through Lee, Lee has denied the charge. In an earlier session of his trial, Lee said he had met Kang but never delivered any money from Kim.

A former president of Gwangju MBC, Lee was CEO of Kim’s Star Mobility. He was suspected of having arranged connections between Lime and top politicians and officials in the Moon administration. Lee was indicted in July on charges of embezzlement, ordering evidence destroyed and paying bribes.

Calling Kim’s testimony a “complete lie,” Kang said he will file a criminal complaint with the prosecution on Monday.

“This is a matter going beyond my personal reputation,” Kang wrote. “I cannot allow them to stain the integrity of President Moon and our administration.”

Kim and another key suspect in the scandal, Lee Jong-pil, are currently undergoing separate but related trials on charges of misappropriation, embezzlement and other misdeeds related to the freezing of Lime Asset Management funds, which led to massive losses for its investors.

Lime made suspicious investments in Kim's company, and Lee was the chief investment officer of the hedge fund. The duo was arrested in April 2020 after months on the lam. Prosecutors believe they colluded to siphon money out of Lime. Through Kim’s connections, Lee invested Lime’s funds into a variety of companies that have since gone under.