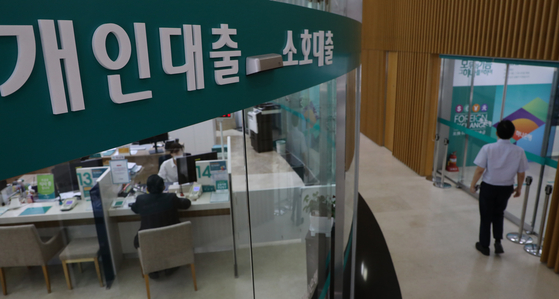 Bank of Korea survey shows banks will tighten lending to households and companies in the fourth quarter. [YONHAP]


Banks are expected to tighten lending to households and companies in the fourth quarter although demand for new loans is expected to remain high.

The Bank of Korea (BOK) released the result of a survey of 201 financial institutions about their positions on lending standards, borrowers' credit risk and demand for new loans between July and September as well as their forecasts for the same subjects for the October to December period.

A BOK index measuring banks' lending standards for fresh loans hit negative five in the fourth quarter, compared to 11 in the first quarter, one in the second quarter and zero in the third quarter. This index ranges from negative 100 to 100, and a reading below zero indicates that there are more lenders that said they will tighten standards on new loans compared to those who will ease them.

Lending standards for household lending will be tighter than for companies. The index for mortgages was negative six and negative nine for unsecured loans.


The index was negative three for both large companies and SMEs.


Due to ultra-low interest rates and tighter requirements to take out mortgages, households have been relying on unsecured loans to get investment capital or even for living expenses. Banks have been relatively easy about giving unsecured loans, but that trend will end, the survey forecast.

SMEs will also have some difficulty getting loans in the fourth quarter.

Banks have been mostly generous with SMEs' request for fresh loans: the index has been positive for the last seven months, since the first quarter of 2019, when the index stood at negative 10.


The central bank explained that the likelihood of an SME borrower being unable to repay debt was still at a high level in the October to December period of this year, which is why loan approvals will become more difficult.

The BOK index measuring lenders' stance on borrowers' credit risk reached 24 in the fourth quarter compared to 20 in the same quarter of last year. In the previous quarter, the index stood at 31.

This index can also range from negative 100 to 100, and a positive figure indicates that there were more lenders who said credit risks will increase than those who answered the opposite.

“Lending standards for households are forecast to be tightened in banks’ attempt to manage credit soundness and concerns over the low-income class’s ability to repay debt,” the central bank said.

The banks said, however, that standards for extending existing loans for SMEs will be maintained at a relaxed level.
Demand for new loans is forecast to remain at a high level in the fourth quarter, especially from SMEs and households amid lingering uncertainties about the Covid-19 pandemic, the survey showed.

The BOK's index measuring loan demand from SMEs was 24 in the fourth quarter, compared to 32 in the previous quarter. A reading above zero indicates that there were more respondents who answered that new loan demand will rise than those who answered the opposite.

This index for households' unsecured loans was 29 in the fourth quarter, compared to 41 in the previous quarter.

Bank of Korea could shift its stance slightly toward growth