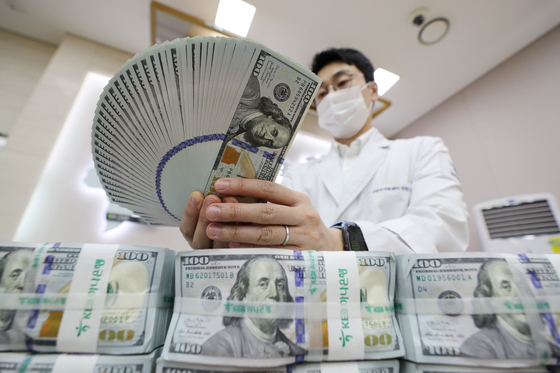 Korea and the United States extended their $60 billion bilateral currency swap agreement for six months as uncertainties remain with the coronavirus crisis.

The size and conditions of the agreement remain the same.

The Bank of Korea (BOK) and U.S. Federal Reserve agreed on a bilateral currency swap line on March 19 when the coronavirus was shaking currency markets. Currency swaps allow two foreign parties to exchange one currency for another at fixed rates.

Since the operation began, the BOK had been offering U.S. dollars from the currency swap to the domestic market through auctions. As of May 6, a total of $19.8 billion has been provided to financial companies in Korea through six biddings.

With the currency markets settling down, the BOK has temporarily suspended such auctions.

“The domestic foreign currency market and the global dollar market have been stabilizing recently, but uncertainties still remain due to Covid-19 which is why [the BOK] concluded that the currency swap lines should be extended,” the bank said in a statement.

“The BOK expects the latest extension will contribute to maintaining stabilization in the market.”

If necessary, the BOK said it will restart auctions for dollars.

Back in March, the U.S. Fed formed currency swap lines with nine countries including Australia, Singapore and Brazil. The extension will be applied to all nine agreements, according to the Fed.

"Extending the swap line when two months are left until the expiration means that market uncertainties have been pre-emptively resolved," said Finance Minister Hong Nam-ki Thursday.

A day after the agreement was announced, Korea’s main stock index, the Kospi, rose 7.4 percent and the value of Korean won to U.S. dollars appreciated by 3.1 percent.

The last time Korea made a bilateral currency swap agreement with the United States was in 2008 during the global financial meltdown. That agreement was worth $30 billion and lasted for six months. Eventually, that swap was extended by nine months.