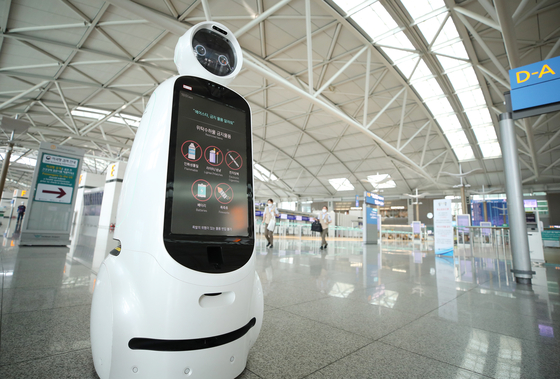 The robot Airstar, created to assist passengers, sits idly at Incheon International Airport, which has been relatively quiet during the coronavirus pandemic. [YONHAP]


In the age of artificial intelligence (AI), big data and robots, many local jobs are expected to become obsolete, and public servants are no exception, according to a report submitted by the Ministry of the Interior and Safety to the National Assembly.

The Interior Ministry requested the report from Yonsei University and received it last September, and it was recently submitted to Rep. Park Jae-ho of the ruling Democratic Party, who is part of the Public Administration and Security Committee at the National Assembly.

The report identified 12,000 public servants in 18 central government offices as of last September, and predicted that up to 25 percent of them could be replaced.

In terms of job positions, administrative and civil complaint management tasks were the most at risk for becoming obsolete in the ministries' central offices — 539 positions in all. A further 507 accounting jobs, 444 administrative operation jobs and 405 software management jobs could be replaced by AI. The research team at Yonsei University said repetitive administrative and managerial tasks that require little creativity — including clerical work, accounting, budgeting and system management — were especially at risk of obsolescence.

As automation grows over the next five years, 75 percent of execution and management tasks were likely to be replaced, and 25 percent of evaluation and analysis tasks could be substituted. The researchers predicted that in 11 to 20 years, 61.54 percent of administrative operation jobs will be automated. In 21 to 30 years, 62.5 percent of planning management positions will be integrated with technology, making those some of the most difficult areas to be automated.

“Rather than the government’s vision for reorganization, which involves reassignment across organizations and functions, the innovation method should be established by identifying the areas that require additional human resources and those that can be replaced by new technology,” said Rep. Park.