Risk of boredom has more Koreans scrabbling for board games

Risk of boredom has more Koreans scrabbling for board games 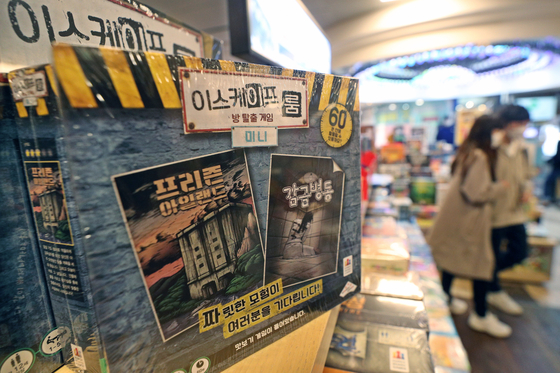 Board games are displayed in Kyobo Bookstore in Jongno District, central Seoul. According to Kakao, sales of board games and puzzles through KakaoTalk’s gift store spiked 716 percent in April compared to January. [NEWS1]

“I remember I enjoyed putting puzzles together with my mom when I was young. When I can’t go outside [due to Covid-19], I began doing them again,” Kim said. “Rather than using smartphones, it’s really fun concentrating on it and getting rid of the thoughts in my mind.”

The prolonged Covid-19 pandemic has been changing people's lifestyles. As social distancing grinds on and people spend more time at home, they seek different ways to entertain themselves and relax, investing money in new hobbies and pastimes.

Kakao on Oct. 9 released a report highlighting shifting consumer patterns through the pandemic. The company analyzed data collected from its KakaoTalk gift store, which allows users to exchange gifts through the messaging platform.

According to data from KakaoTalk’s gift store, which has around 38 million users as of July, sales of board games and puzzles increased by 716 percent in April compared to January before the coronavirus paralyzed the country. Sales saw a 643 percent jump in March.

Sales of home-gardening products increased 224 percent in April compared to January, while sales of pets and pet products have increased more than 30 percent in the February-June period.

In the coronavirus era, home is no longer just a place to only sleep: It’s a restaurant, a gym and even a work place. That renewed relationship with the space also drove up sales of interior design products.

Sales of those products in March increased 46 percent compared to January. During the same period, sales of kettles and cups grew by 47 percent while sales of lighting and stand lamps soared 51 percent. Cushions and mats saw sales increase by 44 percent.

However, sales of products that are usually used for outdoor activities declined.

Ticket sales for cultural activities such as movies decreased by 54 percent while gift cards or gift certificates for department stores declined by 39 percent. Sales of hair and beauty products were also reduced by 19 percent.

“Home Training” is another new and popular trend. As many gyms had to shut down due to the pandemic, more Koreans have started working out at home.

The number of registered users of an at-home workout app by Kakao VX, an affiliate of Kakao Games, skyrocketed 439 percent as of June compared to January. In April, roughly 51 percent of all users completed the workouts the app offers, a 155 percent hike from last year’s 20 percent.

According to the app, users work out an average of 400 seconds every day.

After the Covid-19 outbreak, people also write more, but online. Based on analysis from content-publishing platform Brunch by Kakao, the number of registered writers increased 52 percent in May compared to January.

“Through the data, we were able to realize people’s changing lifestyles as they spend more time at home,” a spokesperson for Kakao said. “The result came as lots of people try hard to seek solace and find something fun at home in order to get over the boring daily life."