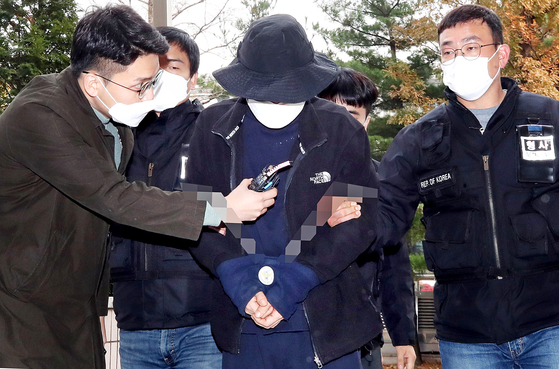 The 48-year-old man who allegedly attacked his downstairs neighbors with a knife after police officers came to his residence to investigate a noise complaint they had filed against him is escorted to his arrest warrant review at the Incheon District Court on Nov. 17. [YONHAP]


Recent police academy graduates are being called in for mandatory retraining as readiness is seen wanting due to online education during the pandemic and following an incident where an officer fled the scene of a violent crime.

The retraining of graduates of the Central Police Academy, which is responsible for training patrol officers and other field officers, is unprecedented in the history of the Korean police.

The incident that led to the retraining took place in Namdong District, eastern Incheon. Two officers were dispatched to a four-story apartment building to deal with a noise complaint. While one officer was speaking with a man on the first floor and another officer was speaking with a woman and her two daughters on the third floor, the woman and her daughters were attacked with a knife by a man.

The woman suffered a cerebral infarction and has yet to regain consciousness following surgery, while her daughters are expected to recover.

While the police are looking into the incident, the family filed a report against the officer on the third floor for fleeing the scene after the assailant pushed the officer aside to lunge at the three women.

The officer claimed she left the scene to request backup and medical assistance after seeing the mother slashed.

According to another resident of the building, the patrol officer on the first floor left the building upon hearing the commotion and did not come upstairs to protect the family.

One officer had a Taser and the other a gun, and neither was used during the incident.

Both officers have been dismissed from their posts, Incheon Police Agency said Wednesday.

Police attention has focused on third-floor officer’s lack of readiness to respond to physical danger, which they said may have to do with the online nature of training amid the Covid-19 pandemic.

The retraining plan is expected to involve approximately 10,000 recent graduates of the Central Police Academy from the past two years and will cover all of the school’s students from the 300th to 307th intake.

An official at the National Police Agency who spoke to the JoongAng Ilbo on the condition of anonymity said he expected the retraining of recent police academy graduates to be complete in about two months.

The retraining curriculum is expected to cover the use of Tasers, firearms, and physical force to restrain suspects.

The Central Police Academy has also said that it will increase training time for Tasers and physical restraining methods from 33 to 36 hours and 30 hours to 72 hours, respectively.