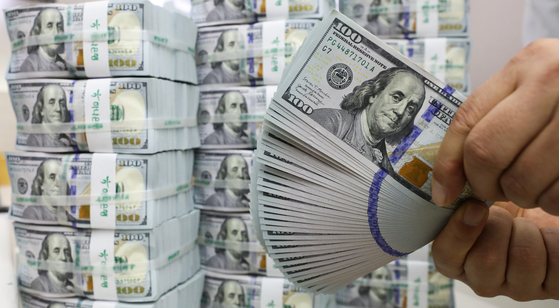 U.S. dollars are displayed at a Hana Bank branch in Myeong-dong, central Seoul, on Oct. 7. Foreign direct investment in the third quarter hit a new record thanks to investment from China. [NEWS1]


Korea’s foreign direct investment (FDI) in the third quarter rose to a new record for the period despite the ongoing coronavirus pandemic, largely thanks to massive investment from China.

According to the Ministry of Trade, Industry and Energy on Tuesday, FDI amounted to $5.23 billion in the third quarter.

Not only is that a 44 percent year-on-year increase, but it is also the largest amount ever recorded in the third quarter.

However, FDI in the first three quarters shrunk 4.4 percent compared to the same period a year ago, down to $12.9 billion.

The government said this was largely because of the significant decline of FDI in the first half, when the coronavirus pandemic hit globally.

The government noted that the improvement in the third quarter shows the confidence of foreigners in the Korean market.

The government's confidence has recently been building up with favorable indicators including the September export results, which showed Korea’s exports seeing its first year-on-year increase in seven months.

Exports in September grew 7.7 percent on year, ending a downward trend that started in February when the coronavirus outbreak started to gain momentum in China.

The Korean government also cited the latest Fitch report that kept Korea’s credit score at AA- — unlike the 107 countries that either saw their credit ratings lowered or are expecting them to be lowered — as proof of foreign investors’ confidence in Korea’s handling of the pandemic.

The increase in FDI in the third quarter was largely due to foreign investors doubling on previous investments.

While fresh new investment has shrunk 10 percent compared to a year earlier, from $1.84 billion to $1.65 billion, the size of existing investments has doubled from $1.56 billion to $3 billion.

The government said there has been a significant increase of investment in the latest technologies regarding materials, parts and equipment, especially applied to the automobile, semiconductor and display segments.

Investment in these areas increased from $270 million to $950 million.

As a result, the investment — which was down 43.7 percent in the first half of this year — eased to a 9.6 percent decline as of the third quarter.

Investments in IT have increased 20.5 percent as of the third quarter, a significant upswing from a 1.3 percent year-on-year increase in the first half.

The government also noted that there has been growing foreign investment related to the Korean Green New Deal.

In the third quarter, investment from China alone surged 172.5 percent year-on-year to $1.25 billion.

When including other places where there’s a huge Chinese population, including Hong Kong, Singapore, Taiwan and Malaysia, foreign investment amounts to $4 billion, a 47.8 percent year-on-year increase.

The Korean government said while it expects FDI in the second half to see a recovery, it still raised the possibility of it shrinking if the Covid-19 situation prolongs, or if there is another major spread.

The United Nations Conference on Trade and Development projects the global FDI to shrink 40 percent this year compared to the $1.54 trillion in 2019. It expects FDI to see an additional decline of 5 to 10 percent next year to below $900 billion.

FDI rises 15 percent in the first quarter to $5.45 billion