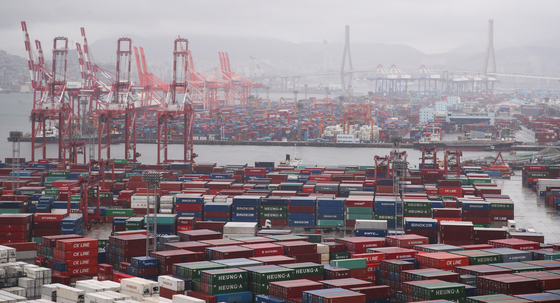 Piles of containers that are to be exported sitting at a port in Busan in July. IMF raised Korea's economic outlook thanks to Korea's major trading partners reopening its economies and Korea' efforts in controlling the pandemic. [NEWS1]


The IMF has joined other think tanks in raising Korea’s economic growth outlook for this year after the government's successful efforts to control the coronavirus outbreak.

The IMF on Tuesday projected Korea’s economy to decline 1.9 percent, an improvement from a 2.1 percent drop projected in June.

If Korea’s economy declines as much as the IMF projected, it would be the third best performance among the 39 countries categorized as advanced economies.

Korea’s economic growth this year was raised from the June projection largely thanks to the reopening of Korea’s trading partners that had closed down economic activities due to the spread of the pandemic.

Additionally, the Korean government’s aggressive policies including four supplementary budgets were considered a positive factor in getting Korea’s economy back on its feet.

However, the economy was still considered to decline compared to a year ago due to the resurgence of Covid-19 since mid-August, which has affected the domestic market and the service industry.

The international agencies’ forecast almost matches the predictions made by other Korean institutions including the Bank of Korea, which projected a 1.3 percent decline while the Korea Development Institute is looking at a 1.1 percent decline.

However, next year’s growth forecast for Korea was lowered 0.1 percentage points from June’s to 2.9 percent.

The IMF projected the world’s economy to fall 4.4 percent, an improvement from a 5.2 percent decline in June. Global trade is now expected to contract 10.3 percent instead of the 11.9 percent drop projected in June.

The United States, which is continuing to see the number of confirmed cases rise, was one of the countries whose economic growth projections have improved significantly.

The IMF projected the U.S. economy to fall 4.3 percent instead of the 8 percent decline projected in June.

Europe is also expected to see improvements as the economy is expected to decline 8.3 percent instead of 10.2 percent.

Japan, on the other hand, saw its economic growth improve, but only by 0.5 percentage points, from a 5.8 percent drop projected in June to 5.3 percent decline.

China’s economy is forecast to further expand from the 1 percent growth projected in June to 1.9 percent, while emerging markets are expected to fall a steeper 3.3 percent instead of the 3.1 percent drop forecast in June.

This is largely because of India, which has been seeing a significant surge in coronavirus cases lately. India’s growth has been revised to a 10.3 percent decline, faster than the 4.5 percent drop projected in June.

Gov't warns hoarders not to do it