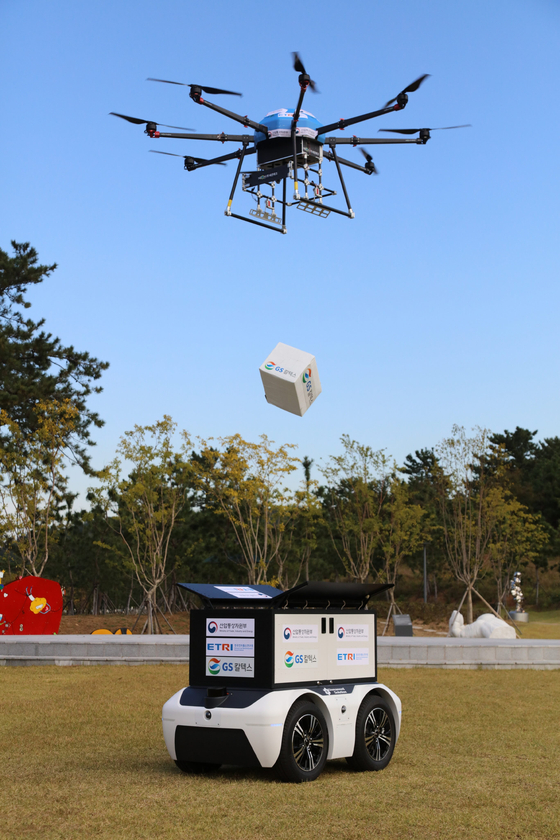 A drone passes a package to an unmanned autonomous robot in Yeosu, South Jeolla, during a demonstration Tuesday. [GS CALTEX]


GS Caltex demonstrated how a drone and robot can deliver stuff on Tuesday using a gas station in Yeosu, North Jeolla, as a hub.

GS Caltex, Korea’s second-largest refiner by sales, demonstrated a delivery service using a drone and robot, which delivered daily necessities from a nearby GS25 convenience store to a customer who placed an order via a mobile app in Jangdo Island in Yeosu.

Once the order was placed by the customer, a drone from a gas station in Yeosu was filled with the ordered items from the nearby GS25 store. It flew 0.9 kilometers (0.6 miles) across water and landed in a clear space. An unmanned automotive robot drove the final 0.7 kilometers to the final destination.

The drone was made by Neontech, while the unmanned automotive robot was made by Unmanned Solution.

GS Caltex says it will be able to raise logistics efficiency and convenience by using its gas stations' hubs for drone deliveries. It said it expects drone deliveries to help deliver relief goods to areas that are remote and not easy reach. Customers who prefer so-called contactless deliveries could also like the service.

GS Caltex said it is working on commercializing drone deliveries to islands in partnership with the Ministry of Trade, Industry and Energy and the Electronics and Telecommunications Research Institute.

Drone deliveries are being worked on elsewhere in the world.

The company's goal is to deliver lightweight packages to customers within 30 minutes.