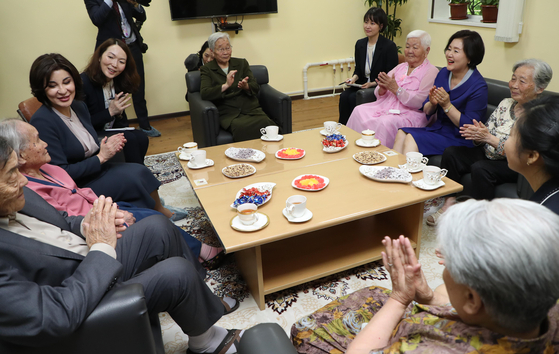 CHANG HYE-SOO
The author is the head of the sports team at the JoongAng Ilbo.


In the 1860s, Koreans started to migrate to Primorsky Krai in Russia. By the early 1900s, about 20 percent of the population were from Joseon (1392-1910). Russians called them “Korejskij,” meaning Korean in Russian.

After a socialist revolution led by the Soviet Union, Joseph Stalin suspected that the Korejskij had colluded with imperial Japan. From 1937 to 1939, 170,000 ethnic Koreans living in Primorsky Krai were forced to move to Central Asia. They settled in the new territory, started growing rice and continued their Korean lifestyle and culture.

In November 1989, the Berlin Wall fell, and the communist bloc in Eastern Europe collapsed. The Soviet Union was affected. In March 1990, Lithuania declared independence, followed by Georgia in April 1991. In August 1991, Estonia declared independence on the 20th, Latvia on the 21st, Ukraine on the 24th, Belarus on the 25th, Moldova on the 27th and Kyrgyzstan on the 31st.

On Dec. 12, Russia also declared independence. With Kazakhstan’s declaration of independence on Dec. 16, the Soviet Union was dissolved. Nationalism prevailed in the countries that gained independence, and Kazakhstan and Uzbekistan, where ethnic Korean populations were large, were no exception. The Korejskij people were losing ground.

Writer Lee Hoe-sung, an ethnic Korean living in Japan, was born in Sakhalin in 1935. His father was from Hwanghae Province and was a migrant mine worker. He settled in Japan after World War II. In 1972, he became the first ethnic Korean to receive the Akutagawa Prize. He travelled to Sakhalin and Primorsky Krai in Russia and Central Asia to research topics related to Korejskij. His 1992 novel “Basin” is about the third identity that belongs to neither North Korea nor South Korea. As a Zainichi Korean, an ethnic Korean living in Japan, Lee saw himself mirrored in Korejskij.

Since 1988, the Korean government allowed Korejskij to regain Korean nationality or move back to their motherland permanently. They returned after 150 years. Ddaetgol Village in Ansan, Gyeonggi, and the Goryeoin Village in Gwangju are their communities.

Many Korejskij still live in hardship abroad. Arirang Nursing Home, a shelter for first-generation Korejskij, opened in Tashkent, Uzbekistan in 2010. As the facility is struggling due to Covid-19, the Korean government offered emergency medical assistance. Kudos for the good work. It is something a good country should do. A better country would offer the service as a system rather than by an order from the president.