Mobile negative pressure rooms have been set up in a parking lot of the Seoul Metropolitan Seobuk Hospital in northern Seoul on Thursday. Due to the surge in new infections, 80.9 percent of beds for critical Covid-19 patients were occupied by Wednesday's end. [YONHAP]


As the daily coronavirus count rises in Korea, nursing homes and hospitals are facing outbreaks among their most vulnerable patients — and are unable to send them to dedicated Covid-19 hospitals because they are filled up.

At one hospital in Deokyang District in Goyang, Gyeonggi, the Covid outbreak has put a halt to normal treatments. “We’re temporarily halting our outpatient treatment,” read a notice posted Tuesday.

This hospital has recently been put under cohort isolation — the shutting down of an area to isolate a group of patients exposed to the virus.

The hospital, equipped with 200 sickbeds, has about 100 in-patients who are suffering from chronic disease, dementia or need rehabilitation.

Despite 80 percent of the patients being elderly and bedridden, the hospital isn’t categorized as a nursing hospital and was unable to administer Covid-19 vaccines to its patients. Patients could get inoculated individually outside upon their guardian’s request, but the majority of them didn't.

And recently, an infection cluster broke out.

According to the district public health center, after around 20 employees and patients at the hospital contracted the virus on Nov. 13, more than 105 people were confirmed positive for the coronavirus as of Wednesday. However, only seven were able to get transferred to a Covid-19 hospital.

“Patients are under cohort isolation, but I heard that many of the caregivers tested positive and were sent to residential treatment centers,” said one person whose mother is in the hospital.

“Many of the patients are bedridden and need assistance when eating, moving and having their diapers changed,” the person said. “Only a few medical staff are in charge of this, and they say their tasks are like a living hell.”

An official from the public health center said it is impossible to transfer the patients to Covid-19 hospitals as their beds are filled up.

“We are taking out only those who are absolutely in critical condition, and treating the rest inside,” the official said. “The standard for critical patient became stricter, and only those whose oxygen saturation has decreased, who are suffering from shortness of breath or mental deterioration can apply for transfers.”

The hospital says it is managing the crisis, but patients' families are worried.

“The majority of the patients are people who cannot do anything on their own, and the very least amount of care and treatment is being given,” said the person whose mother is in the facility. “Apart from Covid, I’m worried if my mother might die of hunger.”

As of Thursday, 36 nursing hospitals and facilities are under cohort isolation across the nation, according to the Korea Disease Control and Prevention Agency (KDCA). At these facilities, a total of 1,880 people have tested positive, and 80 of them have died.

Breakthrough infections are also affecting some institutions as the immunity from vaccines wane.

Cohort isolation is inevitable to prevent transmission into the local community. But nursing facilities do not have the infrastructure and manpower to treat critically ill Covid-19 patients, which often puts confirmed patients at risk of developing a severe case or even dying.

An official from a Covid-19 designated nursing hospital said, “Four out of five patients coming in are from high-risk groups and their symptoms could develop into pneumonia.

“One or two out of ten eventually develop into severe pneumonia and need a tube put into their windpipe or to be put on a respirator, and have to be transferred to another hospital,” the official added.

Last year, someone whose relative died in a hospital in cohort isolation posted a petition on the Blue House website calling the country’s quarantine system goryeojang, an ancient burial practice in Korea in which children carried their old and useless parents deep into the mountains and left them to die.

In a bid to protect the elderly, the government on Wednesday shortened the period between booster shots and the primary series of vaccines for the elderly in institutions to four months from the original six.

But people under cohort isolation are not included.

Health authorities explained that people who are classified as contacts of confirmed patients could be in the incubation period of the virus, and should be inoculated after they are released from isolation.

“Many casualties came from nursing hospitals during the third wave of the pandemic,” said Kim Dong-hyun, a professor of social and preventive medicine at Hallym University College of Medicine.

“The cohort isolation system may had been effective in terms of quarantine but questions were raised over its therapeutic aspect, and it doesn’t seem to have been improved after nearly a year,” Kim said. “Health authorities should come up with a measure that goes beyond cohort isolation and that can actually treat these patients.” 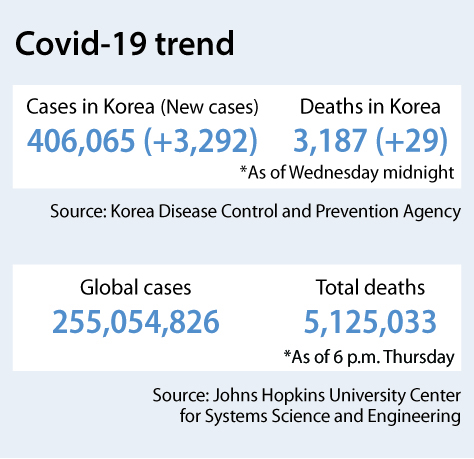 Critical cases also remained at an alarming figure of 506, going past the hospital system's breaking point of 500 cited by the government.

Twenty-nine more people died of the virus, bringing the death toll to 3,187.

With the continuing spread of the coronavirus, President Moon Jae-in ordered the government Thursday to make all-out efforts to stabilize the situation, according to presidential spokesperson Park Kyung-mee.

“In particular, infections among the elderly as well as critically ill patients are increasing,” Moon said, calling for a thorough medical response such as swift procurement of hospital beds.

Need for nursing home renovation in Korea highlighted by pandemic