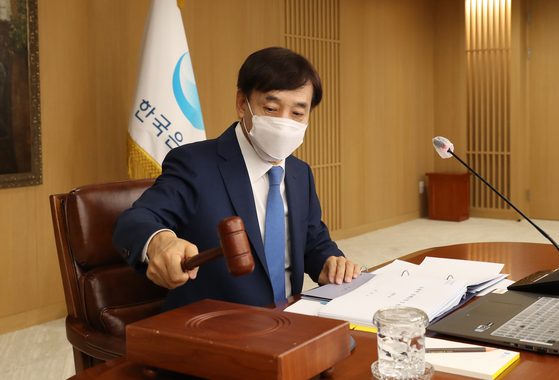 Bank of Korea Gov. Lee Ju-yeol hits the gavel during a monetary policy board meeting in central Seoul on Wednesday. [YONHAP]


The Korean central bank kept its benchmark interest rate unchanged at a record low of 0.5 percent on Wednesday as it took a pause to assess the economy impacted by the pandemic and the effects of previous cuts earlier this year.

“[The BOK] decided to keep the interest rate steady as there is a need to examine the effects of monetary and fiscal policies at a time when [the government] ramps up its expansionary fiscal stance under an accommodative financial condition,” the governor explained during an online press briefing.

The latest decision, which was made unanimously, was widely expected and will likely last for a while, according to analysts, as the BOK has little room to adjust the rate in the pandemic-stricken economy.

The central bank said that although the economy shows signs of recovery, some sectors such as investment, consumption and labor market remain weak.

“The Korean economy has continued to recover, albeit at a slow pace,” it noted in a statement, “Although the slump in exports has eased, gains in private consumption have been tepid as the number of newly confirmed cases increased again. The recovery in facilities investment has been subdued, and the correction in construction investment has continued.”

The latest export record at $48.05 billion put an end to the losing streak for the past six months.

The bank expected this year’s growth to be minus 1.3 percent, presenting a higher rate compared to international institutions like the International Monetary Fund and private research centers, which put the projection near the minus 2-percent range.

Analysts predict that the central bank will continue to freeze the key rate.

“Bank of Korea will likely hold the benchmark interest rate for a prolonged period since the rate is already near the effective lower bound in the face of concerns for financial instability,” said Baek Yoon-min, a researcher at Kyobo Securities.

The effective lower bound refers to a point beyond which further monetary policy in the same direction is counterproductive.

“It is somewhat inevitable to count on an expansive fiscal policy, but in the long run, the debt must be kept at a sustainable level.”