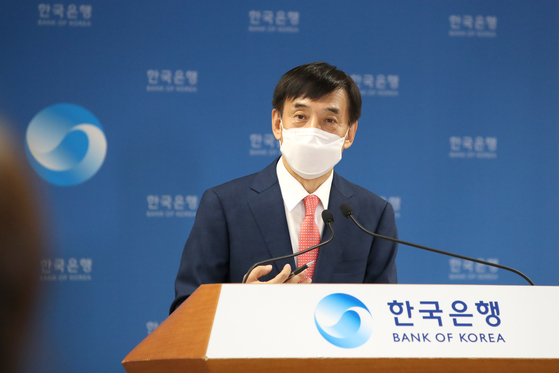 Bank of Korea Gov. Lee Ju-yeol hinted at the need to raise interest rates within this year.

While Lee has been sending signals of a potential rate hike over the past couple of months, it is the first time he specified "within this year."

"We have announced our policy direction to normalize our currently expansionary monetary policies within this year," Lee said during an online press briefing held Thursday.

Asked if the central bank has decided to speed up a rate hike, Lee said, "I've been thinking of the need to raise rates within this year even as I was giving the commemoration speech for the bank's [71st] anniversary [earlier this month,] though I did not realize I hadn't actually mentioned 'this year' until today."

Lee said the current record low base rate of 0.5 percent was set because the country's economy faced the possibility of significant contraction as a result of the coronavirus pandemic. It is right for the central bank to change its policies as the macroeconomic situation changes, he said.

Lee said the economy was recovering at a "face pace" and added that even if the bank was to raise interest rates a little, it would still be pursuing an expansionary policy.