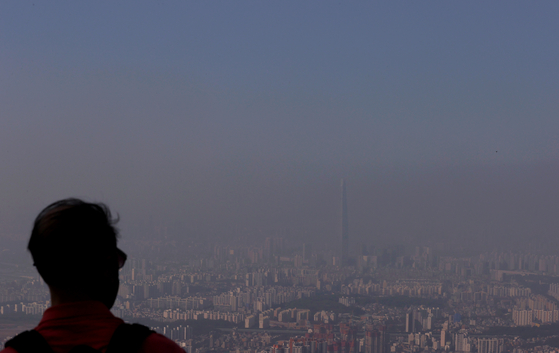 Seoul sits in a cloud of ultrafine dust particles on Tuesday as fine dust levels reached "bad" for the first time in months. [YONHAP]


Ultrafine dust levels in Seoul reached "bad" on Tuesday for the first time in more than three months after factories started reopening in China.

The bad level is issued when 36 micrograms to 75 micrograms of ultrafine dust particles are recorded per cubic meter, according to the Environment Ministry.

According to Air Korea, Seoul and the surrounding metropolitan areas as well as the Chungcheong provinces are expected to continue to experience "bad" levels of ultrafine dust during the early hours of Wednesday. Other regions will post "normal" to "good" levels.

Ultrafine dust levels are expected to drop later in the week.

“From the previous day through this morning, fine dust blown in from offshore had an effect on Korea’s air quality,” said an official from the National Institute of Environmental Research. “Also, the stagnant movement of air above the country caused more dust to accumulate and pushed fine dust levels up."

“Fine dust levels are forecast to return to normal tomorrow.”

Ultrafine dust levels have been unusually low in Seoul this year, due to the coronavirus pandemic shutting factories and unusual weather patterns. 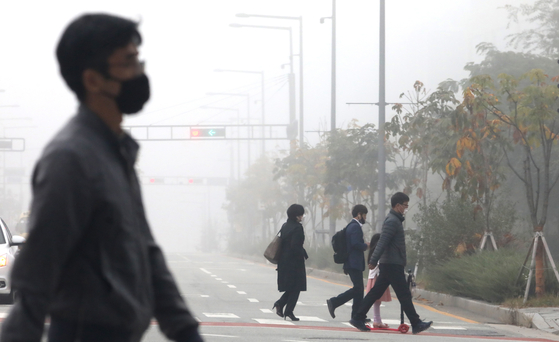 
Experts say the number of air pollutants from China rapidly decreased when the pandemic was at its peak in the country, greatly contributed to the clear skies.

However, air pollutants rebounded back to pre-coronavirus levels as China’s economy started recovering in the second quarter. China’s GDP increased by 4.9 percent on year in the third quarter, according to the country’s national statistics agency on Oct. 19. China’s GDP has increased for two consecutive quarters this year.

According to the Centre for Research on Energy and Clean Air, an independent research association, China’s nitrogen oxide emissions dropped by 40 percent on year at the height of the pandemic but bounced back to last year's levels in summer this year. Nitrogen oxide is an air pollutant that creates ultrafine dust particles in the air.

“If the wind does not blow in our favor, fine dust levels will worsen even more this winter.”

The IMF predicted China's economic growth to reach 1.9 percent this year, being the only country that received a positive figure from the IMF.