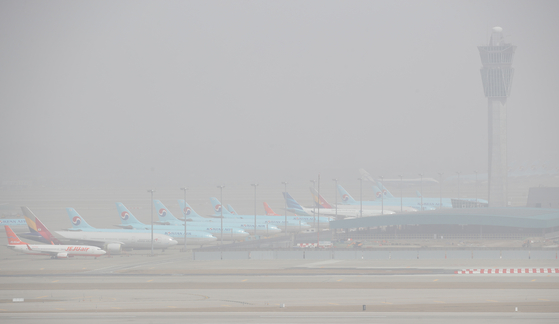 
An extraordinarily severe yellow dust storm from northern China and Mongolia blanketed South Korea on Monday, prompting authorities to issue a yellow dust warning for the entire country for the first time in 11 years.

According to the Korea Meteorological Administration (KMA), the yellow dust that originated from a storm in the Gobi Desert in Mongolia and the Inner Mongolia Plateau in China from March 26 to 28 was carried to the Korean Peninsula on the northwesterly wind.

The PM 10 level reached a peak of 1,348 micrograms in Daegu at 10 a.m. Monday, exceeding the "very bad" level by almost nine times.

The concentration of ultrafine dust -- particulate matter less than 2.5 micrograms, or PM 2.5 -- also rose to "very bad" levels nationwide. Weather authorities categorize levels of PM 2.5 above 35 micrograms per cubic meter as "bad" and above 75 micrograms as "very bad," while the World Health Organization recommends keeping levels below 25 micrograms.


Park Jung-min, a spokesman at KMA, said, "The yellow dust in the upper atmosphere sank to the earth's surface on the descending current, and this is why the yellow dust concentration was observed to be so high this time."

Another spell of yellow dust hit Korea on March 16, but it was not as bad because the heaviest concentration of dust passed over the Korean Peninsula.

Yellow dust warnings have been issued in most parts of the country. Warnings go into effect when yellow dust is expected to continue for more than two hours with an hourly average fine dust level of 800 micrograms per cubic meter or higher. That is the level at which the sky looks yellow and dust can be seen accumulated on vehicles or indoor furniture. 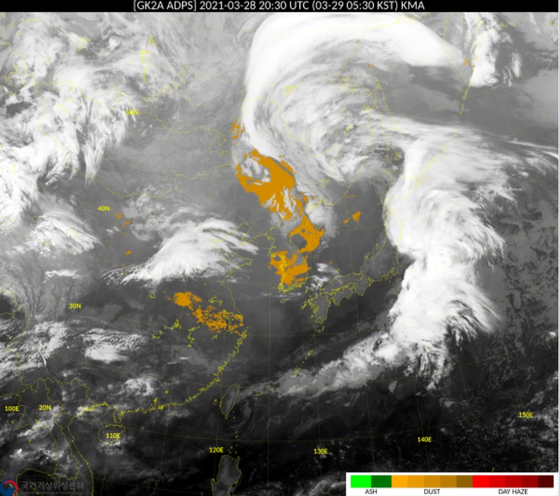 
According to the KMA, a yellow dust warning was issued for Seoul for the first time in six years since February 22, 2015 as the capital recorded 1,044 micrograms per cubic meter. The last nationwide warning was issued on March 20, 2010.

According to IQAir, a Swiss air quality technology company ranking air quality of cities around the world, Seoul ranked first and Incheon second as the most polluted cities as of 10 a.m. on Monday.

The Korea Meteorological Administration asked children, the elderly, and citizens with respiratory or cardiovascular problems to refrain from going out, and if outdoor activity is inevitable, one should wear a mask of KF80 quality or better.

The yellow dust is expected to start fading from Tuesday, but it could continue depending on the flow of atmospheric pressure around the Korean Peninsula.

To dust we return