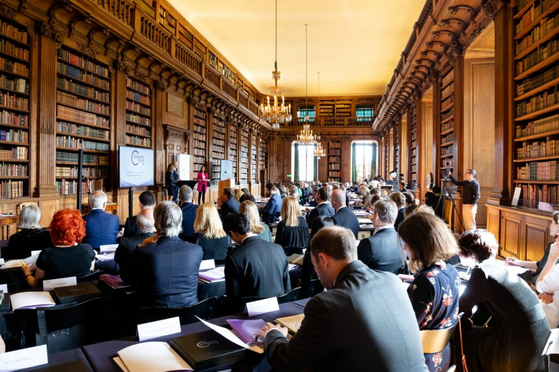 Dementia Forum X at the Royal Palace in Stockholm, Sweden, in May 2019. [DEMENTIA FORUM X]

The biggest Swedish international forum on dementia is coming to Korea next month.

Dementia Forum X (DFX), an annual conference on dementia supported by the royal family of Sweden, will be held at Coex in southern Seoul on Nov. 26.

“The conference, one of best known conferences on dementia and Alzheimer’s disease, will bring together leading experts from around the world to discuss next steps in treatment and care for people diagnosed with dementia,” said Sam Jeon, CEO of Rebrain and one of the organizers of the conference in Korea.

“The discussion about dementia will be especially interesting here, one of the leading places in the world when it comes to medical research and innovation on dementia.”

The DFX was established by Swedish Care International (SCI) in 2015 in collaboration with Forum for Elderly Care to share information and experiences on caring for and treating patients with dementia.

Owing to the full support of the Swedish royal family, DFX has grown into one of the three major international forums on dementia and Alzheimer’s disease in the world, together with those hosted by Alzheimer's Disease International (ADI) and Alzheimer's Association (AA).

"Dementia is one of the largest, most complex and challenging health issues facing humanity today,” Queen Silvia of Sweden said during the forum hosted at the Royal Palace of Sweden in Stockholm in May 2019, according to the Swedish Royal Court. "Therefore, it fills me with hope to see the commitment that exists for this cause.

"For well over two decades, I have been an advocate for improved care and quality of life for people living with dementia and their loved ones,” she said.

Queen Silvia’s mother, Alice Sommerlath, was diagnosed with dementia in the final years before her death in 1997 at the age of 90. As she cared for her mother, the queen saw the need for the country to have a special facility to focus on dementia care and treatment.

In 1996, she founded Silviahemmet, the benchmark dementia care institution in Sweden. 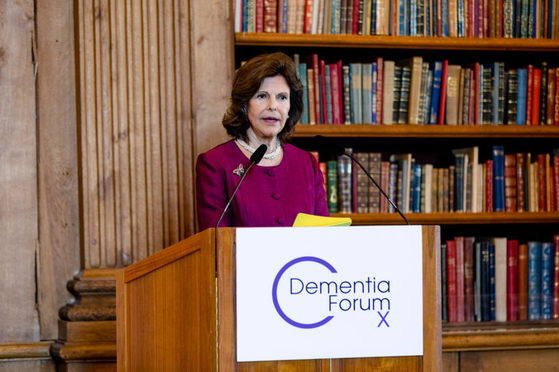 Queen Silvia of Sweden speaking at the Dementia Forum X at the Royal Palace in Stockholm, Sweden, in May 2019. [DEMENTIA FORUM X]

To share the Swedish experience and research with organizations abroad, the SCI was founded in 2006 under the patronage of Queen Silvia.

“Looking back at the time that has gone by, I am grateful for the progress that science has made,” she was quoted as saying during the forum last year. “Never before have we had so much knowledge about dementia diseases as we do today. And never has there been a greater ambition and determination to fight them.”

DFX is known for its wide spectrum of discussions, which are divided into five divisions — business, finance, society, research and care. Last year, it drew around 100 CEOs and policymakers from around the world, according to DFX.

DFX Korea will be the second time that the forum is hosted abroad. It was held in Tokyo in 2018.

The forum’s theme this year will be “New Hope,” with topics tabled for discussion including recent research in treatment of dementia and international trends on national health care programs on dementia.

Speakers will include Petra Tegman, CEO of SCI; Paola Barbarino, CEO of ADI; Harry Jones, CEO of AA; Swedish Ambassador to Korea Jakob Hallgren; as well as experts in Korea such as Song Jae-jun of Korea University Hospital, Seo Sang-won of Samsung Medical Center and Lee Geon-ho of Chosun University, who will introduce a type of biomarker technology to diagnose dementia at an early stage.

Experts joining from abroad include Miia Kivipelto from Karolinska University in Sweden, who will speak about the latest research on dementia prevention and Philip Scheltens, head of the Alzheimer Center at VU University Amsterdam, who will describe clinical trials of a treatment known as “GV1001” by pharmaceutical company GemVax & KAEL.

Representatives of IKEA will also be present at the conference to speak about the latest projects between IKEA and Queen Silvia to design homes for people with dementia.

The conference will be held both offline and online to accommodate restrictions on travel for participants from abroad. The offline venue will be COEX Hall D, which will also hold exhibitions on dementia from Nov. 25 to 27.

One such exhibit is an open-type laboratory by Guro Hospital of Korea University and Korea Digital Therapeutics Cooperative, who will also jointly hold a symposium on diagnosis and treatment of dementia with digital technology.

There are around 50 million people who have dementia in the world, according to the World Health Organization, and every year there are nearly 10 million new cases.

According to ADI, Sweden is home to around 150,000 people living with dementia, a figure the Swedish government expects will increase by over 50 percent by 2050.

Korea is home to over 750,000 people living with dementia, according to the National Institute on Dementia in Korea in 2018.

That number may rise rapidly if current population trends in Korea continue.

Dementia is most common among people aged over 65. Korea is one of the fastest-aging societies, and is set to become the world’s most aged society by 2067, with nearly half of its population being over 65, according to a study by Statistics Korea.

The Korean government adopted a national plan on dementia in 2017, and is one of 32 nations around the world to do so, according to ADI.

The conference is supported by SCI, the Swedish Embassy in Seoul, IKEA, Business Sweden and Swecare.