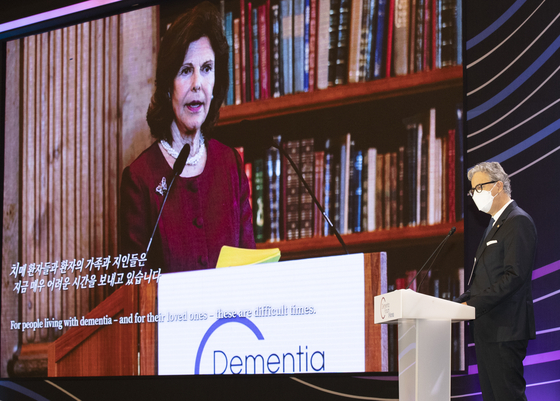 Jakob Hallgren, ambassador of Sweden to Korea, speaks at the Dementia Forum X Korea in Coex in southern Seoul on Thursday and relays congratulatory remarks from Queen Silvia. [LIM HYUN-DONG]


The Covid-19 pandemic has highlighted the extent of people living with dementia around the world, said Paola Babarino, CEO of Alzheimer's Disease International, at the Dementia Forum X Korea in Seoul Thursday.

“Governments have an easy way out by saying that Covid-19 is preoccupying their minds and slowing down the progress [of efforts to tackle dementia], but actually, our community has been hit the hardest by Covid-19,” said Babarino, speaking virtually at the forum.

“We know now that 20 percent of people in northern Italy who died of Covid-19 had dementia. [It was] 26 percent in England. And of the 85 percent of the people that got Covid-19 and died in Canada, 66 percent were people living with dementia. So the statistics about Covid-19 and dementia and its impact have been incredibly sobering.”

The annual forum, established by Swedish Care International in 2015 and supported by the Swedish royal family, is one of the top international conferences on dementia.

For both Sweden and Korea, dementia is important in health care policies, given that both nations have rapidly aging populations. Dementia, found most commonly among people over 65, is an illness suffered by around 50 million people around the world.

“We have installed over 250 centers on dementia throughout the country, and have launched this year a national research project on dementia for the next decade,” said Korea’s Health Minister Park Neung-hoo, who joined the forum virtually. “Like Sweden, Korea is hoping to develop more home-based care programs for dementia patients and the elderly population.”

Sweden's population aged decades earlier than Korea, from as early as the 1970s.

“Every fifth person over the age of 80 in Sweden today is estimated to be living with dementia,” said Swedish Health Minister Lena Hallengren, who also joined the forum virtually. “Two years ago, the Swedish government adopted a national strategy on dementia care [...] I know that South Korea adopted an integrated community care [system] two years ago. My firm belief is that platforms like the Dementia Forum X gives a chance [for the international community] to cooperate on the latest research on dementia.” 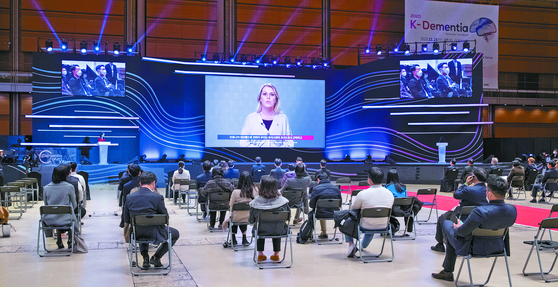 Experts on dementia care and treatment around the world shared some of their latest findings.

Lee Geon-ho, professor of biotechnology at Chosun University, said that soon, with big data technology and artificial intelligence (AI) programs, it will be possible to predict how likely a person is to get dementia in their later years.

Lee said that once they have 10 years' worth of data, the team should be able to run the data on AI programs to find out what may be some of the earliest signs for people with Alzheimer’s disease.

“Once we have those signs down, then even a quick saliva test should be able to yield results on how likely it is that person is going to get dementia in their later years,” Lee said.

Today, there are several types of cognitive and neuropsychological tests, blood tests and brain scans available, but not many people, especially those living in low- to middle-income nations, have access to them.

According to Alzheimer's Disease International, one in 10 people living with dementia in low- to middle-income countries receive a diagnosis of dementia during their life.

In treating dementia, a combination of drug and non-drug treatments was found to have been effective, according to Miia Kivipelto from Karolinska University in Sweden, who leads World-Wide Fingers, a global network of clinical trials for prevention of dementia and Alzheimer's disease.

“Dementia is a multifactorial and complex disorder, and I believe that multi-domain intervention is the way to go,” said Kivipelto, joining the forum virtually.

The Fingers method, as it is known amongst researchers, focuses on non-drug treatments, such as intervention in diet and regular training such as brain exercises.

Korea is a member of World-Wide Fingers, and a team led by professor Choi Seong-hye, who teaches neurology at Inha University, has adapted the Fingers program to fit the lifestyle of the elderly population in Korea.

“For instance, Korean elderly people really like doing group exercises and activities in a park or at a community center, rather than doing things on their own at home,” Choi said at the forum. “So in our pilot program with 50 people aged between 60 to 79, we involved them in interactive training programs in community centers, which were adapted from Fingers’ training programs. They came to the community centers three times a week. The retention rate for the [nearly one-year-long] program was 93 percent. It has been our finding that you can reduce the likelihood of your getting dementia in your later stages of life by as much as 40 percent by participating in such training.” 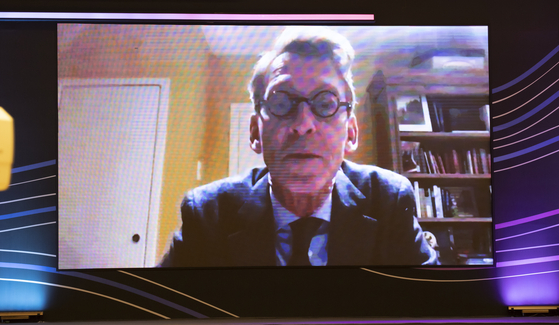 Other speakers at the forum included Philip Scheltens, head of the Alzheimer Center at VU University Amsterdam, who shared the results from the latest clinical trials of a treatment known as GV1001 by Korean pharmaceutical company GemVax & KAEL.


"It is important to note that there are companies in Korea that are at the forefront on the field [on dementia treatment] at the moment," he said, adding that clinical trials of GV1001 in the past two years were yielding positive results with people with severe levels of Alzheimer's disease.

“Omtanksam means ‘caring’ in Swedish, which means they’re not just for people who are aged,” she said. “The idea is to be more inclusive. [Consider that] sliding doors were actually once designed for people in wheelchairs to be able to have access to shopping malls and buildings. Today, all of us [use them and] take them for granted.” 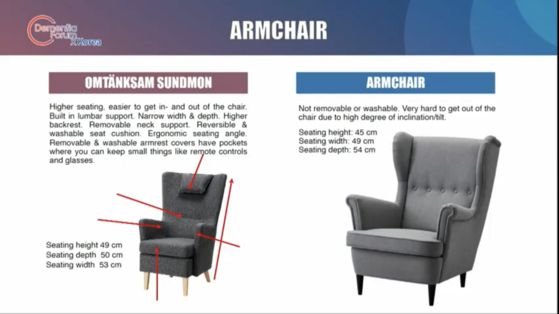 A design of an armchair that is part of Ikea's Omtanksam line of products. [SCREEN CAPTURE] 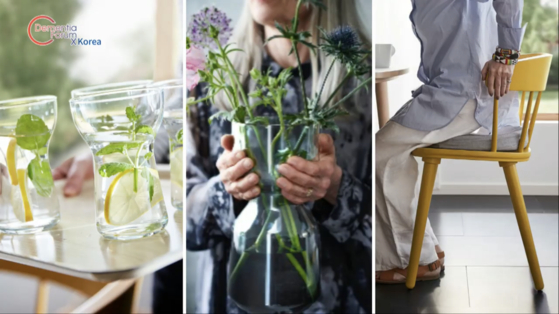 Different products being designed for inclusiveness at Ikea. [SCREEN CAPTURE]

Monti said that some of the designers of the Omtanksam range of Ikea’s products have a form of impairment, including herself.

“I had a stroke, which means I lost tactility in my right hand, and I can’t lean down too much [because of my] blood pressure,” she said, adding that having these personal experiences have helped her think of new designs for products to meet different needs of people.

The forum’s organization in Seoul was supported by the Swedish Embassy in Seoul, IKEA, Business Sweden and Swecare.

“Sweden and Korea share similar challenges and I know that our two countries have similarly high ambitions to take responsibility for our aging populations,” said Jakob Hallgren, ambassador of Sweden to Korea. “For this, we all need to join hands to share ideas and develop solutions [...] One great illustration is today’s forum, preparing for one of the necessary issues to deal with now and in the post-Covid era.”

KT to market Databricks solutions and services in Korea

LG U+ to double number of IT professionals in CDO unit