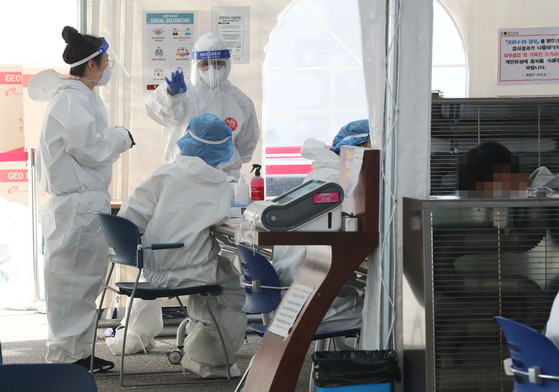 Medical staff in full quarantine gear are seen at a testing center in Gangnam District, southern Seoul, on Tuesday. [YONHAP]


Korea’s health authorities announced Tuesday they will overhaul the country’s social distancing system by the end of the month based on feedback from a forum of medical experts to be held next week.

Son Young-rae, a spokesperson for the Ministry of Health and Welfare, said the government was considering segmenting the current three-tiered system even further in line with factors other than new caseloads, such as the fatality rate and number of patients in serious condition.

To discuss methods to improve the system, as well as the country’s antiepidemic efforts in general, the Central Disaster Management Headquarters will consult medical experts at a forum to be held at the Korea Chamber of Commerce and Industry on Oct. 27.

Experts will engage in discussions along with health officials toward building a sustainable and effective system to combat Covid-19 amid predictions the pandemic will continue for a while, Son said.

“We will listen to opinions about restructuring the social distancing system and improving our antiepidemic strategy, and reflect these ideas in [planned changes],” the spokesman added.

The country’s current three-level social distancing scheme was rolled out in June after infections began spreading in the capital.

The government relaxed social distancing restrictions from Level 2 to Level 1 on Oct. 12 after daily cases subsided to less than 60 for two weeks.

The tough restrictions under Level 3 are applied if daily infections exceed 100 for 14 straight days, which stipulates bans on all meetings of 10 people or more and the closure of all schools.

But the system’s reliance on case numbers as the sole determinant of changes between these tiers has come under criticism from experts who say the government should also consider factors like overloading at treatment centers or the number of serious cases.

Health experts also noted Tuesday that hospitals and treatment centers for the elderly remain most vulnerable to cluster infections, judging by a series of cases that have emerged surrounding such institutions over the year. 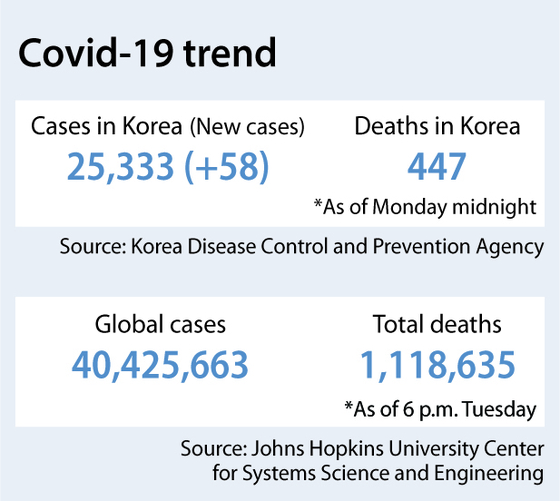 Since Monday, the government began Covid-19 testing on all 160,000 or so patients and workers at medical centers catering to the elderly located in the greater capital area. The tests will be done through the end of the month, officials said. Further tests could be rolled out for an additional 350,000 patients and workers at such institutions outside of Seoul, Gyeonggi and Incheon.

Such concerns were justified by the fact that of the 58 new Covid-19 cases Korea reported at Monday midnight, at least a dozen new cases were linked to clusters in hospitals in Seoul, Gyeonggi and Busan.

SRC Hospital, a rehabilitation and treatment center in Gwangju, Gyeonggi, yielded eight additional cases in addition to 10 detected the day before. According to Gwangju city officials, those newly infected included family members of earlier patients as well as caretakers at the hospital.

A nursing home in Busan and the Dana Hospital in Dobong District, northern Seoul, also remain places of concern, each producing 73 and 67 cases respectively.

This brings total cases to 25,333 as of Monday midnight, the Korea Disease Control and Prevention Agency (KDCA) said Wednesday.

Of the domestic cases, 11 were in Seoul, 22 in Gyeonggi and three in Incheon. Outside the greater capital area, two were found in Gangwon and one each in Busan, Daejeon and South Chungcheong.

Three more patients succumbed to the virus overnight, bringing the total death toll to 447 with a fatality rate of 1.76 percent.

Chunlab says it can help you get to know your gut