Korean health authorities Tuesday warned of stricter surveillance on foreigners staying in the country’s state-run Covid-19 quarantine facilities, saying they will most likely be subjected to more “control” from local officials as they remain isolated for two weeks.

The grim warning came a day after health officials said three Vietnamese nationals escaped a Covid-19 quarantine facility in Gimpo, Gyeonggi, on Monday afternoon, a week into their mandatory isolation.

The three foreigners arrived in Korea earlier this month on a B-2 tourist/transit visa, according to health officials, and all tested negative on their first virus test after entering the facility on July 20, where some 550 people from abroad are currently staying.

Almost everyone coming from a foreign country, including Korean nationals, are required to self-isolate in their homes or one of Korea’s state-run quarantine facilities for two weeks, the incubation period of the coronavirus.

Exceptions are made for a handful of visa categories, such as diplomats and foreign government officials.

The three Vietnamese fugitives are still at large, and local authorities said they aren’t sure why they fled. Police said it appears they escaped the 14-story building by descending from a lifeline on the sixth floor.

It’s the first time any foreigner has escaped a state-run quarantine facility, although there have been some cases where foreigners left other quarantine areas, such as their dormitories.

Nearly 30 foreigners have been deported from Korea so far, either because they left their quarantine zones or for refusing to stay at the government’s isolation facilities.

Yoon Tae-ho, an official at the central government’s Covid-19 command center, said Tuesday in a press briefing that he felt regret about the “shameful” incident involving the three Vietnamese escapees, adding that officials were searching for a way to beef up security in and around the state-run quarantine buildings.

“Police officers and soldiers are controlling foreigners at the isolation facilities, and I think [their surveillance] will have to be reinforced. We’re also considering the installation of more CCTV cameras,” Yoon said.

Yoon continued that the government would pay more careful attention to controlling foreigners in the isolation facility and make sure a similar case never reoccurs. 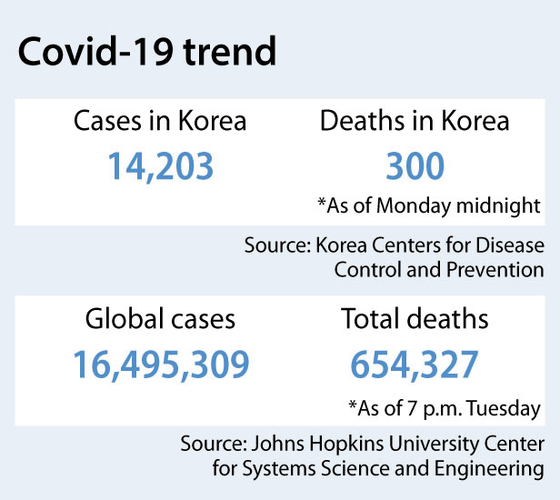 Across the country, 28 people were newly diagnosed with the coronavirus Monday, according to data released by the Korea Centers for Disease Control and Prevention (KCDC) Tuesday morning, up slightly from 25 new cases on Sunday.

Of Monday’s total case load, 23 were imported cases: seven from Kyrgyzstan; four from the United States; two each from Mexico and Morocco; and one each from Algeria, Ethiopia, Bangladesh, the United Arab Emirates, Uzbekistan, Qatar, Kuwait and the Philippines.

Among five people who were locally infected, three live in Seoul and one each live in Busan and Gyeonggi.

One person died Monday, bringing the death toll from the outbreak to 300 people, while 13,007 people had fully recovered, up 102 from the day before.

In Busan, health officials said a woman in her 20’s came down with the coronavirus Monday after coming into contact with her infected father. Her father got infected after establishing contact with an infected Russian sailor.