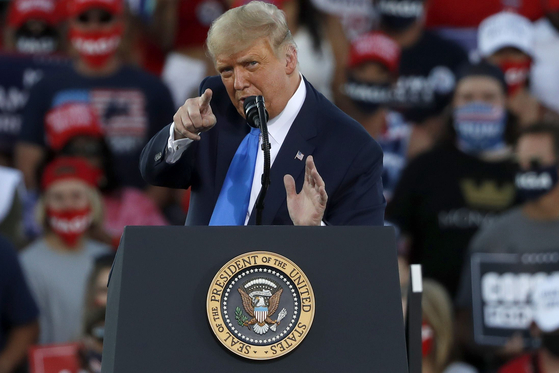 
On Oct. 4, I visited the Walter Reed National Military Medical Center in Maryland, where U.S. President Donald Trump was hospitalized with Covid-19. Dozens of his supporters, sometimes hundreds, gathered in front of the hospital, wishing for him to recuperate.

That day, Trump violated the disease control protocol and drove out to greet the supporters. It was interesting to see how the supporters raved at the leader who still underestimated the pandemic that killed 220,000 Americans, and it was noteworthy that many of the supporters were of minority backgrounds, Black, Latino and Asian. They were wearing red MAGA hats and holding placards and signs depicting Trump’s face.

Trump’s anti-immigration policy and embracement of racism is controversial, but the supporters didn’t seem to care. I asked them in person. Paul Luis, a first-generation immigrant of Latino background, drew a line in the racial issue, claiming that he was not a Latino but an American citizen. He chose America because it’s powerful, and that’s why he supported the strong president. Polls show that Latinx folks supporting Trump is consistently over 30 percent. The New York Times analyzed that immigrants from Cuba and Venezuela denouncing communist regimes and evangelical Christian immigrants support Trump regardless of his policy.

Korean-American supporters have more complex feelings. Various hate crimes against Korean-Americans increased after the spread of what Trump calls the “China virus.” But Kim Tae-su, a member of a Korean-American group supporting Trump, said he had to vote for Trump as he advocates strong “law and order,” especially those who experienced the L.A. riots in 1992. Small-business owners whose businesses were hurt by Covid-19 think Democrats’ call for tighter disease control was farfetched. They are willing to condone Trump’s flaws if the economy can be revived.

In a recent poll, 56 percent of Americans responded they felt better off than four years ago. The numbers were 45 percent in the fourth year of the Obama administration and 44 percent in the fourth year of the Bush and Reagan administrations. While Trump’s approval rating is struggling, he seems to be confident about victory for the same reason. Trump still emphasizes that he has the passion that Biden lacks. Can the passion go farther than the poll numbers? There are two weeks left till the U.S. presidential election.

Bracing for all possibilities