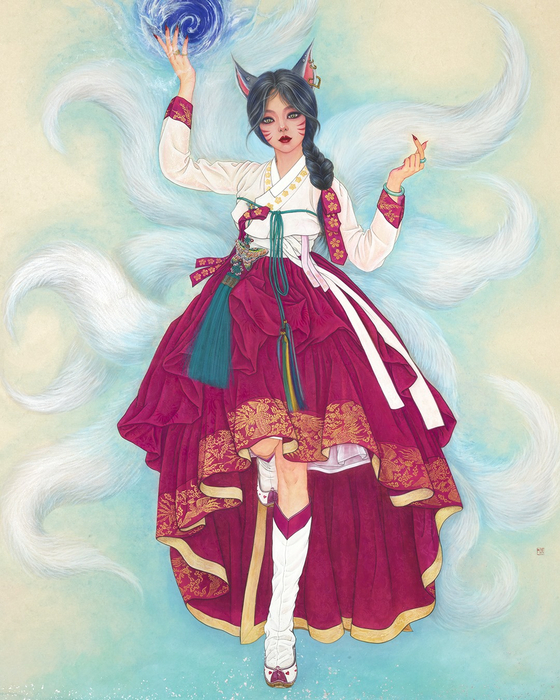 League of Legends' champion Ahri in hanbok, or traditional Korean dress, for an online exhibition to mark Hanbok Day, which falls on Oct. 21. [RIOT GAMES]

Together with four Korean holders of the national intangible cultural assets as well as artists of Korean paintings, the exhibition sheds light on the traditional attire of Korea. The highlight of this online exhibit is the different hanbok, or Korean traditional dress, worn by Ahri, the 89th League of Legends’ champion.

In fact, it’s not the first time for Ahri to be seen adorned in hanbok. The champion was created to celebrate the launch of the Korean server in 2011 and several skins were created with Ahri in hanbok. According to Riot Games, Ahri is inspired by an old Korean folk tale about a nine-tailed fox that possesses impeccable beauty when in human form but is in fact a demon that seduces men in order to take over their lives.

“This exhibition is a part of Riot Games’ corporate social responsibility project that supports Korean cultural heritage that we’ve been carrying out for nine years,” said an official from the company. “We would also like to express our respect toward Korea’s cultural heritages through this exhibit.”

Since 2018, Riot Games has been actively involved in supporting Korean cultural heritage including financing the restitution of Korea’s important cultural properties through its regional office.

The exhibit can be viewed online at event.leagueoflegends.co.kr/hanbok