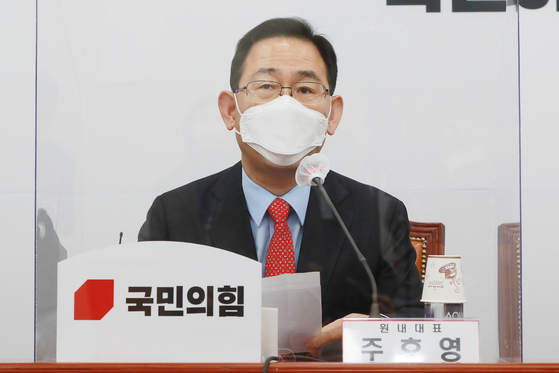 The main opposition party said Wednesday it will make a criminal complaint against those involved in the controversial early closure of a nuclear power plant and alleged obstruction of a state investigation of the case.


"[The party] will report [to law enforcement] all related officials who obstructed the inspection in the process of the unfair closure, abused authority and destroyed official documents on criminal charges," Rep. Joo Ho-young, floor leader of the People Power Party (PPP), said in a party meeting.

On Tuesday, the Board of Audit and Inspection (BAI) announced the result of its investigation of the early closure of the Wolsong-1 nuclear power plant in Gyeongju, North Gyeongsang.

The government watchdog concluded that the economic viability of the country's second-oldest nuclear reactor was unreasonably undervalued.

Joo said, "The fact that government officials, including former Industry Minister Paik Un-gyu, discarded 444 reactor-related documents on the eve of an inspection symbolically shows that the closure was the wrong decision."

He said President Moon Jae-in's alleged remark in 2018 to one of his aides, "When will Wolsong-1 come to a stop?" set off the process leading to the "unlawful, unwarranted" closure of the reactor.

"If [Moon] is found to have any culpability [for the closure], he will be unable to evade it even after his retirement," he noted.

The initial 30-year operational life cycle of Wolsong-1 terminated in 2012. But the nuclear power plant was brought back into operation to run for another 10 years to 2022 during the previous Park Geun-hye administration.

The Moon administration, however, decided in 2017 to decommission it earlier than scheduled in line with the president's nuclear-free energy policy vision, triggering a fierce spat with pro-nuclear energy politicians and experts.