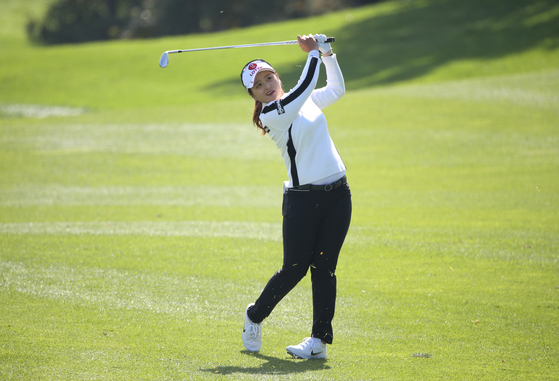 Choi Hye-jin watches her shot during the first round of the KB Financial Group Star Championship at Black Stone Ichon. [NEWS1]


KLPGA golfer Choi Hye-jin may not be picking up as many wins as she did last year, but she is continuing to prove her consistency despite the lack of silverware.

Back in 2019, the KLPGA Tour was dominated by Choi, who won five tournaments and swept the year-end awards ceremony with a total of six awards, including player of the year, prize money, scoring average and many more.

Following a successful season last year, Choi said, “I hope 2020 turns out to be a better year.”

That hope wasn't to be. Choi still hasn’t picked up a single win this season. Due to the coronavirus, the number of tournaments on the KLPGA Tour has reduced, but that still doesn't explain Choi’s no-win season.

Looking at her statistics, it’s hard to believe that Choi hasn’t won a tournament yet as she made the cut in all 12 tournaments she has competed in and had top-10 finishes in 11 of them.

Even last week, at the KB Financial Group Star Championship, the KLPGA Tour’s last major of the season, she finished seventh.

Choi has an impressively high top-10 finish percentage this season.

Back in her rookie season in 2018 it was 66.6 percent. Last season, when she took home all the awards, Choi's top-10 finish percentage slipped to 48.14 percent, but this season that figure has shot up to 91.6 percent. Although Choi hasn’t won a tournament yet, her consistency has allowed her to be ranked first on the KLPGA points standing, at 357 points.

Playing in her third season on the KLPGA Tour, Choi has nine KLPGA Tour titles to her name, although none came this season. Still, that 91.6 percent top-10 winning percentage has her clearly following in Shin's footsteps.

When it comes to numbers and statistics, Choi has made a significant improvement in her iron shots as she is ranked first in greens in regulations percentage this season, from 82.6 percent last season to 84.52 percent this season. Even in her average scoring, she managed to lower it from 70.45 per round last year to 69.92 this season.

But interestingly, despite lowering her scoring average, she no longer has the lowest scoring average. That 69.92 places her third in the category, behind Kim Hyo-joo with 69.17 and Lim Hee-jeong at 69.695.

While Choi’s made improvements in most categories, there’s been one area where she’s been getting worse every season — average putting per round. In her rookie season, Choi had 30.5 putts per round, but that number increased to 31.09 in 2019 and this year it’s at 31.11.

That putting weakness may be what has left her short of picking up a win.

Along with that, as a lot of LPGA Tour players — Kim Hyo-joo, Ko Jin-young, Lee Jeong-eun and Ryu So-yeon — are playing in Korea this season, the competition at each tournament has gotten a lot fiercer.

It’s almost been a year since Choi picked up her last win at the SK Networks Seokyung Ladies Classic on Nov. 3 last year.

Putting aside the competitiveness of the field and her putting, Choi was also unlucky with her first shot at a win this season. In June, during the 14th S-Oil Championship, Choi was ranked first after the first round, but due to the inclement weather, the tournament was canceled.

In order for a tournament to count, all players must play at least 36 holes. Unfortunately, this tournament was canceled after the first round.

With only four more tournaments remaining this season, Choi is still looking for a win.

“Looking at my statistics, I’m playing well right now, but I’ll try to make those tournaments into ones where I can be satisfied with the way I played,” Choi said. “My goal is to win.”

Starting Thursday, Choi will start her first round at the 2020 Huencare Ladies Open at South Links Yeongam in Yeongam, South Jeolla.