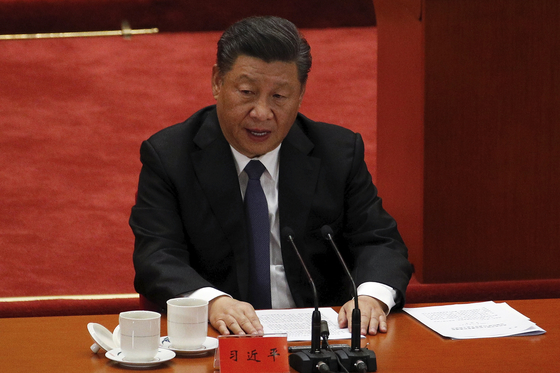 Chinese President Xi Jinping delivers a speech at a conference on the 70th anniversary of the Chinese army entering the Korean War at the Great Hall of the People in Beijing, Friday. [AP]


South Korea on Friday remained tightlipped about Chinese President Xi Jinping’s speech to mark the 70th anniversary of the country’s entry into the 1950-53 Korean War.

“It is not a diplomatic courtesy for me, as a cabinet minister, to comment on Xi’s speech,” Unification Minister Lee In-young said during a National Assembly audit of the ministry.

Earlier Friday morning, Xi gave a 42-minute speech to mark the country’s participation in what it calls the “War to resist U.S. aggression and aid [North] Korea,” sending a message to Washington that it is not intimidated by U.S. power.

The Korean War remains the only military conflict between China and the United States. China fought alongside the North against South Korean, U.S. and United Nations troops, when it sent troops to join the war in October 1950. 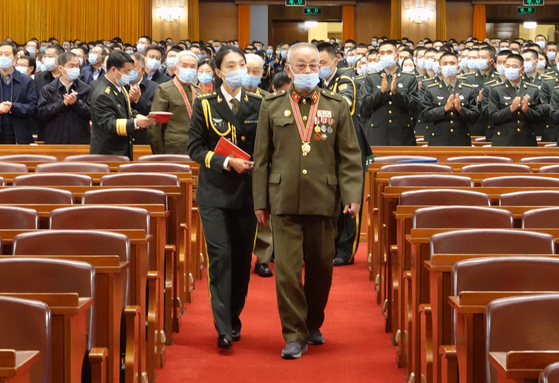 A Chinese People's Volunteers veteran enters the venue of the meeting marking the 70th anniversary of the CPV entering North Korea to participate in the Korean War at the Great Hall of the People in Beijing on Friday. [XINHUA]


The war “shatters the legend that the U.S. Army is invincible,” Xi said at the Great Hall of the People. “The Korean War shows that the Chinese people must not be provoked. If you make trouble, be prepared to bear the consequences.”

Xi threw additional jabs at the United States. “In today’s world, the pursuit of unilateralism, protectionism and extreme egoism leads nowhere,” he said. “Arrogance, always doing as one pleases, acts of hegemony, overbearance or bullying will lead nowhere.”

Without mentioning that the war began on June 25, 1950, when North Korea invaded the South, Xi said the United States decided to intervene in the civil war, forcing China to participate to fight American imperialists and protect China’s national security.

“The war also safeguarded the peaceful life of the Chinese people, stabilized the situation in the Korean Peninsula and upheld peace in Asia and the world,” Xi said.

According to the Korean Central News Agency, Kim sent the flowers to the cemetery of the “the martyrs fallen in resisting America and aiding Korea" in Shenyang and to a monument in Dandong, Liaoning Province.

On Thursday, Kim also visited the cemetery of fallen Chinese soldiers in the North and paid respects. He laid flowers at the grave of Mao Anying, the eldest son of Mao Zedong who died while fighting in the Korean War. Another 132 Chinese soldiers are buried at the cemetery.