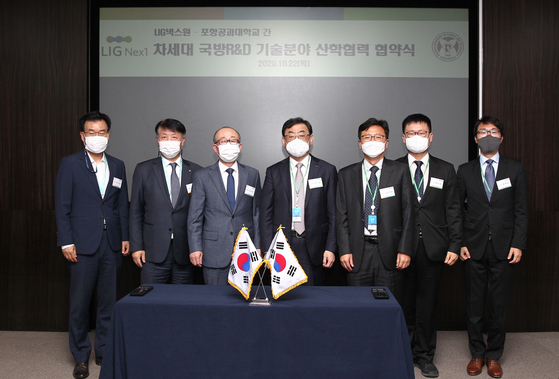 Main stakeholders in the MOU between LIG Nex1 and Postech are photographed at the ceremony that took place last Thursday. [LIG NEX1]

The memorandum of understanding (MOU) signed on Oct. 22 deals with research and development (R&D) for next-generation national defense technologies, which will integrate fourth industrial revolution technology to upgrade weapon systems, including unmanned helicopters.

The partnership aims to combine expertise from the two institutions while fostering talent in the field. LIG Nex1 has been working on high-tech projects for multi-purpose, pilot-less helicopters and small-scale surveillance drones. Postech will contribute its R&D and academic infrastructure centered around its integrated research center for next-generation defense.

LIG Nex1 and Postech will push forward with joint research projects on terahertz technology, which is central in the sensor and detector sector. Other areas of research include unmanned defense systems and advanced individual combat systems.

“LIG Nex1 has been striving for progress on R&D and localization of weapons systems required by future battlefields, such as drones, robots and artificial intelligence,” said Kim Ji-chan, president of LIG Nex1. “We hope that working closely with Postech will increase the public’s interest in the importance of bolstering the R&D capacity for future national defense and contribute to the technological advancement of the military.”