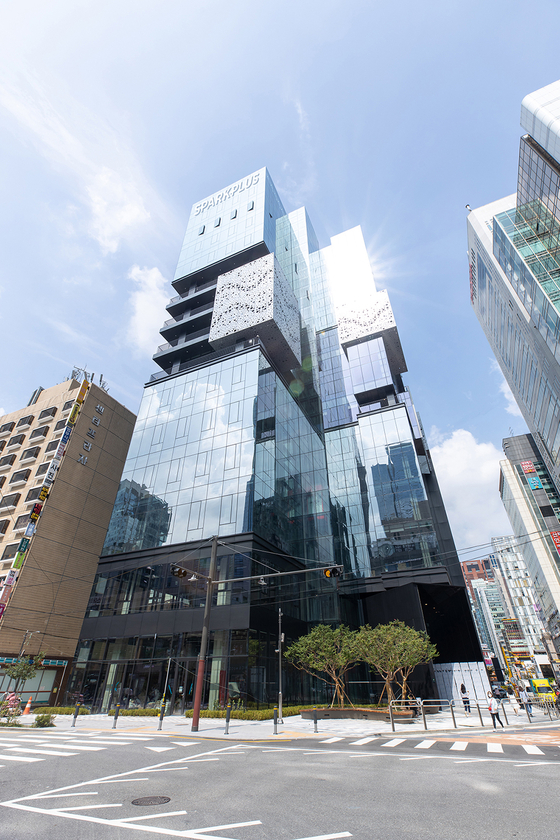 Sparkplus’s fourth location in Seocho District, southern Seoul, which is scheduled to open next month. [SPARKPLUS]

Despite the challenges of the pandemic, Korea’s co-working companies are readying initial public offerings (IPOs).

Fastfive, the country’s largest co-working company by the number of locations, announced on Oct. 20 that it will finish the procedures for an IPO by the end of the year. The company applied for preliminary screening in July and is currently waiting for the results.

If Fastfive succeeds in going public, it will be the first Kosdaq-listed co-working space provider.

Sparkplus also announced the same day that it is currently preparing to go public.

According to the company, the number of customer inquiries increased by 20 percent even after the coronavirus paralyzed the country.

The fast-growing workspace operator newly opened four locations this year, and the vacancy rate is on average very low at about 2 to 3 percent. Of the four locations, two are in Gangnam District, southern Seoul. Roughly 70 percent of the workspaces in the Gangnam locations were reserved before opening.

“With the IPO, we plan to build an office that can suggest a ‘new normal’ for working environment, instead of just offering a co-working office space” said Sparkplus CEO Mok Jin-gun.

Sparkplus named Mirae Asset Daewoo as the underwriter for the company’s possible IPO.

The recent popularity of co-working space is largely due to many mid-sized companies and start-ups that are choosing shared office space over official buildings.

Bespin Global, a local cloud management and consulting service provider, is an example. All of its 700 employees are currently working in Sparkplus’s Seocho District location in southern Seoul.

Leading fashion e-commerce platform Musinsa’s headquarters is in the Seongsu branch of Sparkplus in eastern Seoul.

“At first, I thought the cost for co-working space is quite expensive,” a CEO of an e-commerce start-up, who recently moved into one of the co-working companies, said. “However, shared office space is more reasonable option considering all the monthly rents, maintenance costs, as well as labor costs.”

The pandemic is another driving force. Since Korean companies started adopting a remote working system and flexible working hours after the virus outbreak, shared office space has been a good alternative to office buildings.

“Of all workspaces that our company offers, only 20 percent is for start-ups, while the remainder is currently used by mid- and big-sized companies,” a spokesperson for Fastfive said. “Many taskforce teams of major companies and state-owned companies move to co-working space due to the security issues.”

WeWork, a U.S.-based global shared office provider, failed its IPO last year. In the process of preliminary screening, it turned out that the company generated huge operating losses. After its failure, WeWork co-founder Adam Neumann stepped down from his position.

WeWork Korea is not doing well locally. Since it first entered Korea in 2016, it had been expanding its size by opening at least 10 locations every year. It ended up opening only one location this year.

WeWork’s Euljiro location in Seoul, which was opened in 2017 as the largest-sized space in Asia with a capacity to house 3,000 people in its 10-story building, is now operating on only five floors.

A rapid shift to working from home