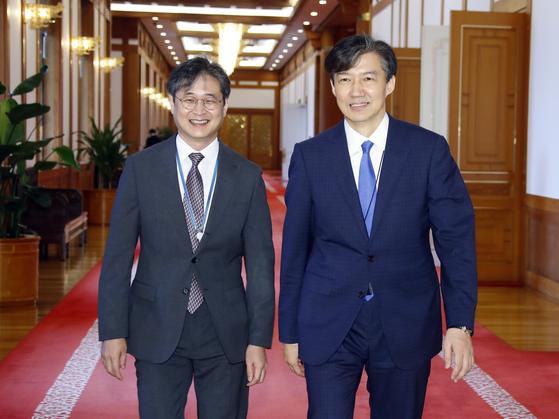 In this file photo, then-Senior Presidential Secretary for Civil Affairs Cho Kuk, right, and Park Hyoung-chul, then-anticorruption secretary, enter a Blue House ceremony to appoint Yoon Seok-youl as the new prosecutor general on July 25, 2019. On Friday, Park testified against Cho in a trial that Cho had ordered him to shut down a Blue House audit into Yoo Jae-soo, a senior financial official, when they worked together in 2017. [YONHAP]


A former presidential secretary in charge of anticorruption has made a series of statements that Cho Kuk, a former justice minister and senior secretary for civil affairs in President Moon Jae-in's administration, abused his power to shut down a probe into one of the president's political allies.

Park Hyoung-chul offered the testimony Friday during a Seoul Central District Court trial in which he and two others — Cho and Baek Won-woo, former presidential secretary for civil affairs — are all charged with abuse of power.

Testifying during the seventh session of their trial, Park said that Cho had ordered him to shut down the Blue House’s audit into corruption allegations against Yoo Jae-soo, a former public servant and a political ally of Moon.

Park said the December 2017 audit indicated that Yoo, who was serving as the financial policy director of the Financial Services Commission, had received bribes. Park said his office wanted to continue the investigation or send the case to the investigative authorities, such as the Board of Audit and Inspection, but Cho decided to shut it down.

“At the time, Cho had the decision-making power,” Park told the court on Friday. “I had already told him enough about the outcome of the internal probe and follow-up measures.”

Park also testified that Baek told him during the audit that he should wait until Yoo's forthcoming resignation before taking any action, and that Baek had asked Park to let Yoo off the hook, citing outside pressure, but he rejected it.

Park said Cho told him to shut down the probe because Yoo’s resignation would resolve the issue.

“Yoo didn’t cooperate with our probe, and there was nothing the special inspection team could have done to compel him,” Park said. “I ended up accepting Cho’s order [to shut down the audit], because Cho said he would take Yoo’s resignation, which was at least a kind of punishment.”

After the probe was shut down, the special audit team that investigated Yoo was extremely disappointed, Park said.

“The audit confirmed many charges, so the case should have been handed over for a further investigation by the Board of Audit and Inspection or the Financial Services Commission,” Park testified.

Park also testified that Cho had lied during the National Assembly’s hearing in December 2018. Cho told lawmakers at the time that the audit had wrapped up without any criminal action against Yoo because the suspicions against him were groundless.

Park told the court that he had written the statement Cho delivered in his remarks to the National Assembly, part of the effort to conceal that the audit was suspended abnormally.

Moon nominated Cho as the minister of justice, despite allegations of abuse of power and suspected academic and financial fraud involving him and his family. Cho served in the post for 35 days, from September to October 2019.

Throughout the prosecution’s investigation, Park said Cho had abused power and ordered him to shut down the audit into Yoo. He also admitted to the prosecution and in the court that he had followed the order.

In a separate probe by the prosecution into allegations that Blue House officials had influenced the 2018 Ulsan mayoral election to help Moon’s friend win, Park told prosecutors that he had been aware of the presidential office’s illegal activities.

The prosecution investigated suspicions that presidential aides had helped Song Cheol-ho, a friend of Moon, win the election in June 2018 by triggering a police corruption investigation into his rival, then-Ulsan Mayor Kim Gi-hyeon of the main opposition party, just three months before the race. Kim was cleared of any wrongdoing in March 2019.

This January, the prosecution indicted 13 people including Ulsan Mayor Song and former presidential aides including Park and Baek. Park’s statement supplied much of the grounds for issuing the indictments.

“Park is not a brazen person who can lie without shame,” an incumbent prosecutor said.

“He knew that what he was doing was wrong, but he could not refuse the Blue House’s orders,” a former senior prosecutor said. “It is hard to say that he is completely free of any responsibility.”