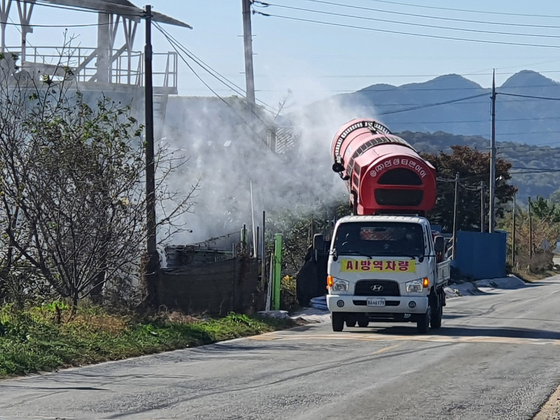 For the first time in nearly three years, a “highly pathogenic” avian influenza virus has been reported by Korean agricultural authorities this week, but there is no indication the disease has spread to any poultry farms.

Avian flu viruses usually do not infect people, but a few transmissions to humans have been reported in other countries in the past. The viruses normally occur among wild aquatic birds and can easily be transmitted to other domesticated bird species such as ducks and chickens, sickening or killing them.

Low-pathogenic avian flu viruses cause little or no clinical signs in birds, whereas highly pathogenic ones cause severe clinical signs and generally lead to a higher mortality rate in birds.

Officials at the city government of Cheonan, South Chungcheong, and the Ministry of Agriculture, Food and Rural Affairs jointly announced Sunday that a H5N8 strain of the avian flu virus was found from a feces sample collected near Bonggang Stream in Cheonan’s village of Pungsye-myeon last Wednesday. Cheonan is about 85 kilometers (53 miles) south of Seoul.

After examining the feces, which apparently was from a migratory bird, officials said they concluded it was a H5N8 strain, marking the first time that a highly pathogenic avian flu virus strain has been discovered in Korea since February 2018.

The previous strain, an H5N type, was also discovered in Cheonan, though near a different stream called Gokgyo.

As of Monday, officials had detected zero signs that the virus reached any nearby poultry farms, as they vowed to ramp up measures to prevent a possible spread. In 2018, nearly 3.3 million poultry animals were culled in Cheonan after the virus had penetrated the city’s farms.

The Agriculture Ministry said that for the time being, people and vehicles will be strictly forbidden from entering within a 500-meter (1,640 feet) radius of the location where the contaminated feces was found last week. Checkpoints have been set up around the area.

Some 1.8 million chickens and ducks from 42 farms within a 10-kilometer (6.2 miles) radius of the feces will also be banned from leaving the perimeter for the next three weeks unless they receive official documents from the government verifying they’re safe.

By late September, Cheonan had roughly 4.6 million poultry animals across 407 farms, according to data released by agriculture officials.

Disinfection trucks and workers have been mobilized around the area to prevent possible virus spread, and stores in Cheonan’s traditional markets that sell and purchase live poultry have been forced to shut down for at least three weeks.

Poultry farmers across the nation have been banned from grazing their animals.

Vice Agriculture Minister Lee Jae-ouk called the current situation a “grave” one during a Monday press briefing, and said that all areas across the nation that contain habitats for migratory birds should be on high alert.

Lee continued that authorities would launch extensive inspections of nationwide migratory bird habitats this week to check on how they’re carrying out disinfection work.