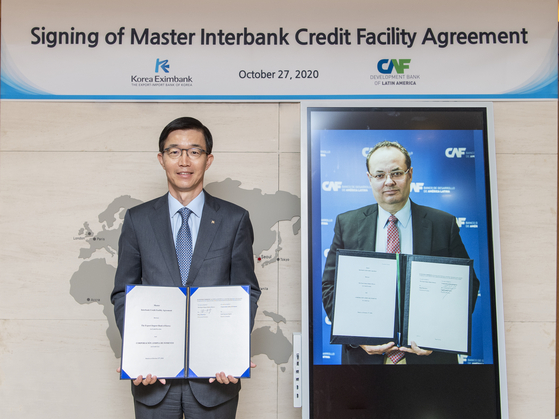 Bang Moon-kyu, chairman and president of the Export-Import Bank of Korea, and Luis Carranza, executive president and CEO of the Development Bank of Latin America, hold up the agreement signed by the two banks, in their respective countries, Tuesday. [THE EXPORT-IMPORT BANK OF KOREA]


The Export-Import Bank of Korea inked a $200 million loan agreement with the Development Bank of Latin America to facilitate Korean exports, the bank announced Tuesday.

Under this bank-to-bank agreement, companies that import Korean goods to the region can borrow from the Development Bank of Latin America (CAF) funds needed to cover transactions, investments and operational costs.

A total of 19 countries, including Peru, Columbia and Brazil, are members of the development bank.

“Central America has huge growth potential due to its plentiful mineral resources, more than 600 million residents and a relatively young population,” said Bang Moon-kyu, chairman and president of the Export-Import Bank of Korea.

“We hope this can enhance the competitiveness of Korean companies in the exports of infrastructure, automobiles and medical goods to the Central American region.”

Trade and investment between the two countries are steadily growing, according to the bank’s data. Korea exported $26.3 billion worth of goods to Central America last year. Investment amounted to $10.2 billion in 2019.

Transactions between the two countries are expected to grow in the future, following the bilateral trade agreement between Korea and Central American countries, that went into effect October last year.

The Korean Foreign Ministry is in talks for an FTA with multiple trade blocs in the region, such as the Mercosur — Brazil, Argentina, Paraguay and Uruguay.

“We will utilize Korea’s loans to enhance the infrastructure of countries in Central America and competitiveness of member countries,” said Luis Carranza, executive president and CEO of the CAF.