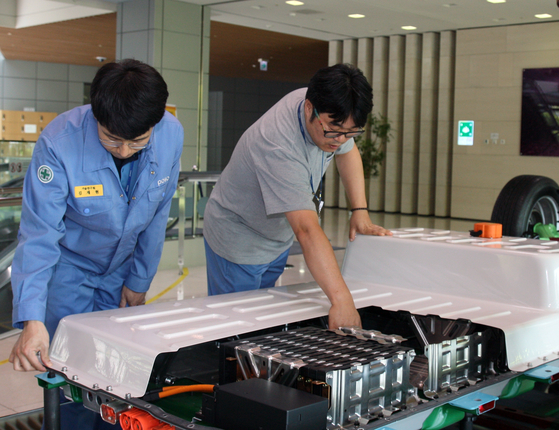 Posco’s electric vehicle battery pack and Giga Steel are displayed in the research and development center of Posco in Song-do, Incheon. [POSCO]

With the new-mobility market shifting its gear into eco-friendly electric and hydrogen vehicles and artificial intelligence systems, Posco is riding the wave of futuristic motors with its state-of-the-art steel products. Combining forces with its affiliate, Posco International, Posco aims to reach a state of self-sufficiency, cementing its position as a total solution provider in the motor market.

To meet electric vehicles’ need for lighter steel, Posco came up with its very own Giga Steel. Capable of enduring 100 kilograms (220 pounds) per square millimeter, it is three times stronger than the same sized aluminum, enabling manufacturers to produce slimmer sheets. Giga Steel also costs less than traditional aluminum in terms of material and production cost.

Posco’s energy-efficient steel plate Hyper No drastically improves energy loss during the conversion of electric energy to rotational energy by 30 percent from its conventional counterpart. Posco’s recent “self-bonding” technology, a procedure of implementing a layer of coating which acts like adhesives, also improves the motor core’s energy loss ratio by 10 percent compared to traditionally welded motors.

Since 2006, Posco has been pushing for metallic bipolar plates’ material development plan and got the plan rolling with Hyundai Motors in 2010. Posco’s Poss470FC steel has been used for Hyundai Motors’ hydrogen electric car, Nexo, since 2018.

Poss470FC, a type of stainless steel made by Posco, passed electrical conductivity, fuel cell’s fundamental properties on durability performances, and real-life durability tests from domestic and foreign research facilities including Hyundai Motors and the United States Department of Energy with flying colors. Also, the International Stainless Steel Forum awarded Poss470FC a New Technology Award, a testimonial to its quality. With Poss470FC, Posco’s current goal is to cut down the manufacturing cost of hydrogen and electric vehicles, enabling its smooth commercialization.

A few of the most crucial factors customers consider before purchasing an electric car are driving distance and battery charging time, both of which are heavily influenced by the anode and cathode materials in batteries. As Posco’s chemical and industrial material affiliate and the only company producing anode and cathode materials simultaneously, Posco Chemical plans to go even further.

Now, Posco’s current missions are to develop affordable nickel-based cathode materials capable of reaching 600 kilometers (373 miles) per charge, and artificial graphite anode materials that can be charged within 10 minutes. After opening a secondary battery material research center in June 2019, dedicated to next-generation anode and cathode materials development, Posco now has the stepping stone to establish itself into one of the battery giants in the industry.

With the investment aimed at expanding its own battery materials’ production capability in and out of Korea and its competitiveness, Posco Chemical daring target is to reach 20 percent of the world’s battery market share by 2030.