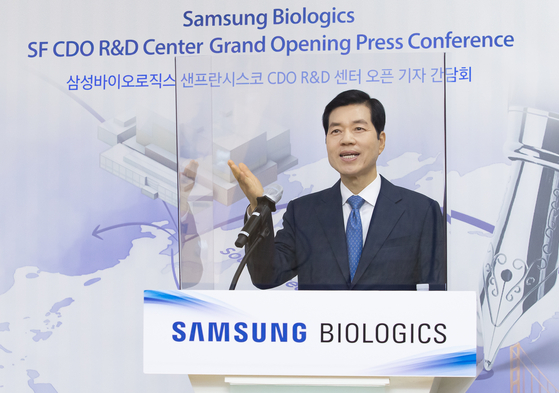 Over the past decade, the Samsung Group affiliate has grown as a contract manufacturing organization (CMO), which mass produces drugs for large-scale Phase 3 clinical trials or market release based on the client’s recipe. Samsung has an annual CMO capacity of 364,000 liters per year, making it the largest in the business.

Compared to CMOs, the CDO business is involved a lot earlier, before market commercialization, and therefore raises the necessity of physical proximity to clients. CDOs are favored by smaller bio start-ups that have the technology but don’t have the experience or capacity to develop bio pharmaceuticals, which typically are long-term projects with a low possibility of success.

Samsung has been pushing efforts to expand this business segment since its launch in 2018.

“San Francisco has a cluster of more than 2,500 life sciences firms — it’s a bio-pharmaceutical mecca. [Among U.S. states] it is also at a relatively favorable condition considering the time difference and communication with our Songdo, Incheon headquarters.”

Over the past two years, Samsung Biologics logged more than 60 CDO contracts. Some of the drugs it worked on have received nods to undergo clinical trials from the U.S. Food and Drug Administration (FDA) and the European Medicines Agency (EMA).

Earlier this year, GI Innovation’s GI-101 drug candidate, which Samsung had worked on since cell line development, was licensed out to Chinese pharmaceutical firm Simcere for 900 billion won ($794 million).

In terms of technology, Samsung Biologics claims it can complete all CDO procedures from cell line development to final production in seven months, which is nearly half the 12 months offered by global leaders in the field.

But until now, a larger portion of the CDO contracts it attracted were from domestic firms — which is why the San Francisco unit marks a big step for Samsung in taking its CDO business international.

During the Thursday press conference, Kim disclosed plans to embark on establishing CDO R&D centers in Boston, also a renowned center for bio-pharmaceutical companies in the United States, and western Europe in 2021.

Business-wise, the advantage of having a CDO unit is that CDO contracts can lead to CMO deals as well, paving the way to solidify long-term relations with bio-pharmaceutical clients.

Samsung’s goal is that by 2030, 50 percent of its CMO orders will be generated by CDO deals, which is in line with a larger initiative to become a “one-stop” service provider offering everything from development to R&D and even mass production.

“Domestically, the CDO business is already in the black, but in a long-term perspective, we still need to put in large-scale investments and hires to expand our business overseas,” said Kim. “Based on our capabilities, I think turning a profit [overseas] would be possible in the next two to three years.”

To complete that initiative of becoming a “one-stop” service provider, Samsung Biologics will give a big push to expand its contract research organization (CRO) business from next year. This process precedes CDOs and refers to working together with bio-pharmaceutical companies from the very early stage of discovering an antibody.

“Samsung Biologics started out on a mud flat in Songdo and became a CMO champion in 2020,” said Kim. “The San Francisco CDO R&D plant will be the first step in becoming a CDO champion in 2025. With the CRO business we start next year, and our aim is to become the global No. 1 by 2030. That will make us the most innovative company that embodies the entire steps from CRO to CDO and CMO.”