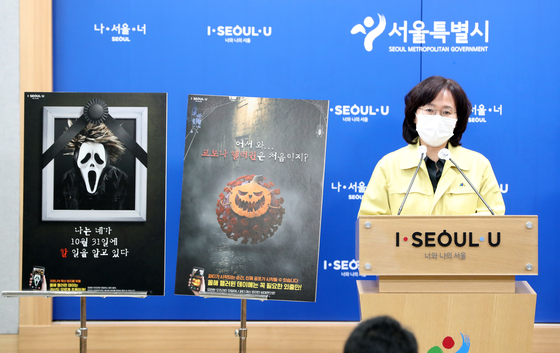 Park Yoo-mi, the Seoul city government’s director of public health, on Wednesday shows posters made by the city to discourage potential revelers from celebrating Halloween over the weekend. [YONHAP]


Prominent nightclubs throughout Seoul will be shutting their doors on Halloween and even the night before amid mounting concerns over mass outbreaks among partying youth.

Many clubs in the neighborhoods of Itaewon, Gangnam and Hongdae, three of the most vibrant night scenes in Korea, said they would not operate over the Halloween weekend after negotiations with the government.

The decision to close on one of the busiest nights of the year follows a stern warning from the Seoul Metropolitan Government Thursday that violations of antiepidemic guidelines at establishments throughout the weekend would be punished without exception.

A city spokesperson said two officials would be dispatched on Oct. 30 and 31 to a total of 108 establishments across the city, where they were to monitor whether the businesses were abiding by sanitation and social distancing rules, like keeping tabs on clubgoers’ contact information and ensuring all people indoors wear face masks.

Any establishments busted for violating the guidelines will be immediately slapped with a two-week operations ban.

“This is an unavoidable measure we must take in order to obtain immediate epidemic prevention results,” said the official.

This year’s Halloween falls on Saturday, stoking fears among health officials that the parties could lead to another large-scale cluster of coronavirus infections, such as the one that emerged last May from clubs in Itaewon in Yongsan District, central Seoul. Officials were able to confirm nearly 300 Covid-19 cases as having been linked to that cluster. 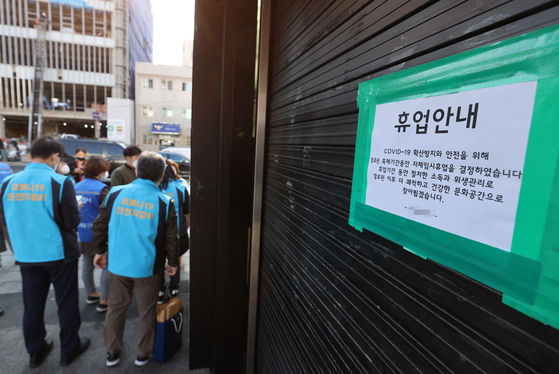 A notice is posted on the doors of a popular club in Itaewon, central Seoul, announcing it will close its doors this weekend, which coincides with Halloween Day, in accordance with the government's recommendations. [YONHAP]


Both Itaewon and Hongdae in Mapo District, western Seoul, are popular among Koreans and foreigners for their vibrant nightlife. On Halloween, the areas are known to attract tens of thousands of young revelers in costumes, though the vast majority of the Korean public doesn’t celebrate the occasion.

In addition to negotiating with operators, the city has mounted a public information campaign to actively discourage the young from coming out to party on Halloween.

Posters made by the city for the occasion, plastered in subway stations across the capital, bear slogans like, “This year’s celebrations could be truly scary,” or “You may become a real ghost by trying to enjoy Halloween.”

Some local governments, like in Gyeonggi and Daegu, have also announced enhanced monitoring of nighttime establishments on Halloween. With the big clubs in Seoul closing this weekend, health officials fear their clientele may head to smaller establishments in surrounding areas.

The government’s anxiety over potential contagions on Halloween may also be driven by the fact that the rate of new infections in recent days is worrying.

Korea added 125 new Covid-19 cases Wednesday, the second day in a row with cases in the triple digits after a small spike earlier this week. 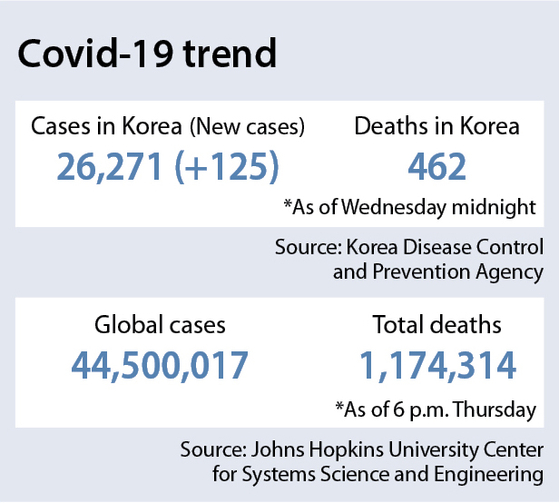 According to the Korea Disease Control and Prevention Agency (KDCA), 106 of the 125 infections occurred domestically, mostly from clusters that remain active at nursing homes and hospitals catering mainly to seniors.

But also dangerous are sporadic infections that continue to pop up at various types of get-togethers and facilities across the country, including saunas, schools, golf clubs or family gatherings.