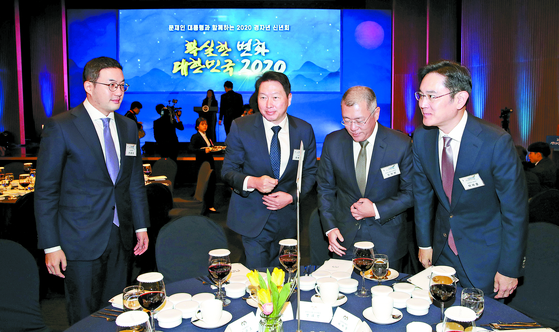 Chaebol are changing with the times and with the generations. As the children of the major shareholders inherit the stock of their parents, opportunities present themselves, as do major challenges.

Lee Kun-hee died in October, and his large stakes in Samsung Electronics, Samsung C&T and Samsung Life Insurance may be passed down to his children. Lee Jae-yong, his eldest son, was named leader of the group by the Fair Trade Commission since 2018.

Last month, Euisun Chung was appointed chairman of Hyundai Motor Group, following in the footsteps of his father Chung Mong-koo and grandfather Chung Ju-yung, who founded the company in 1967.

Koo Kwang-mo, the adopted son of late Chairman Koo Bon-moo, was appointed as the chairman of LG Group in 2018. Kim Dong-kwan, the eldest son of Hanwha Group Chairman Kim Seung-youn, was recently promoted to Strategy Division CEO of Hanwha Solutions. 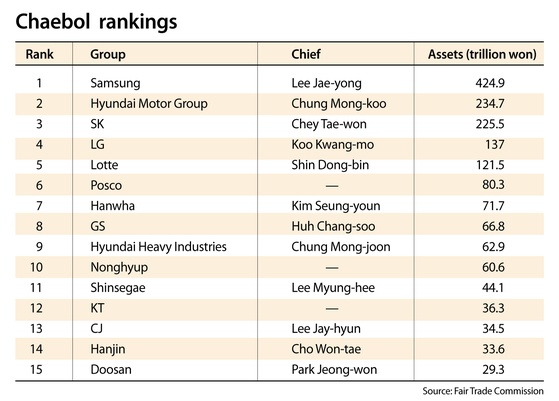 With young leaders gaining influence, many changes are predicted—the relationship between the major shareholders and employees might be the biggest difference.

Unlike their predecessors, the young leaders have been actively communicating with employees of group companies to build closer and direct relationships with them. Chey Yoon-jeong, the eldest daughter of SK Group Chairman Chey Tae-won, got along well with the employees and spent lots of time with them when she was working as an assistant manager at SK Biopharmaceutical.

Chung Nami, the oldest daughter of former lawmaker and chairman of Asan Foundation Chung Mong-joon, who serves as executive director of the Asan Nanum Foundation, is currently pushing hard for boosting the start-up ecosystem.

Some critics disagree. They argue that some young leaders are even more cautious and conservative than their fathers when building a close relationship with others. It’s because they have been trained as leaders since they were very young, knowing that they may lead one day.

“Young leaders of major chaebol may look very nice and humble, but at the same time, they are more conservative and cautious making relationships with others as they were only allowed to have relationships with very few people since they were children,” said an anonymous source from one of the groups.

The way the young leaders operate in business is clearly distinct from their fathers.

The earlier chairmen tended to have a No. 2 behind them. Their children never vest much power in a specific person. They prefer a collective leadership system so they can get help from many others when making an important decision.

“As a leader cannot take care of everything, young people have no other choice but to adopt a collective leadership system such as a council,” said Choi June-sun, a law professor at Sungkyunkwan University.

The ability of the family shareholders to maintain control of the groups is in doubt. Given the current laws and their generally small ownership stakes, their voting power is limited and other methods of influencing the course of the groups are relatively ineffective.

Lee Jae-yong earlier this year issued a vague apology and seemed to suggest that he would accept the realities of the family’s shareholdings.

Shin Yoo-yeol, 34, the eldest son of Lotte Group Chairman Shin Dong-bin, doesn’t hold any shares in any Lotte companies in Korea or Japan, according to local media reports. The younger Shin could be liable for a large amount of inheritance taxes if the older Shin tries to pass the business on to him.

“Compared to the past, it became very hard for leaders to hand down their power. However, they can always come up with some new ways to make that happen such as through differential voting rights,” Park Sang-in, professor of public administration at Seoul National University, said. “If the chaebol want to earn public trust, the young leaders must prove their management ability in advance.”

It is an undeniable fact that the major businesses of the chaebol have been showing slower growth.

The late Lee Kun-hee is much credited with Samsung’s success in semiconductor and smartphone businesses. Lotte Group’s retail businesses were able to make significant success based on the achievement of the late Shin Kyuk-ho, founder of the company.

To survive in the competitive global market, young people must look at the future — 10 years or 20 years from now — and should come up with new and bold strategies.

Some are making quick movements: SK hynix recently bought Intel’s NAND memory and storage business for $9 billion, one of the largest acquisitions in Korean corporate history.

The competition among chaebol is likely to intensify further. As it is nearly impossible to gain much more profit through their existing businesses, they are scrambling to jump into new business opportunities. The competition may already have started as evidenced in the yearlong battery brawl between LG Chem and SK Innovation.

Some are now turning their eyes toward overseas companies in a bid to expand their presence in the global market. SK Telecom recently announced that it will establish a joint venture with Uber, the U.S. ride-sharing company, in the first half of 2021 to increase its focus on transport platforms and services.