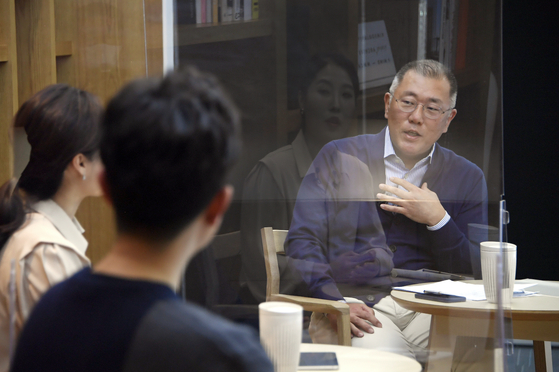 
A mysterious symbol straight out of a dystopian novel is showing up on the employee chat sites of Korea's largest company:

The circle and nine rectangles represent a human figure lying on the ground, and it is the calling card of Samsung Electronics employees angry about being underpaid.

A quiet movement has been brewing for some time, starting even before pay negotiations broke down with the electronics company on March 18. It comes in the context of workers at SK hynix forcing management to overhaul the bonus system in early February and as game companies have upped salaries to impressive levels. By some estimates, they are paying more than Korea's largest companies.

Korea Inc. is expressing shock and awe, but it is ultimately indifferent, most of the companies making vague assurances of better pay while quietly accusing the young workers of being whiners.

"The online bulletin board was plastered with hundreds of posts with the emoticons," said an executive from Samsung Electronics who spoke on the condition of anonymity. "It felt like employees holding a mass protest online."

The electronics maker tried to address discontent after the failure of talks with a 7.5 percent raise, the largest jump in eight years, but some employees have been expressing their dissatisfaction with the emoticon via the online community.

Conflicts over compensation at large companies really got going with the stand off at SK hynix.

Earlier in the year, a company employee sent a letter to colleagues, and cc'd CEO Lee Seok-hee, calling for salaries to be increased. The email said that 2020 bonuses were unchanged from 2019 despite profits doubling.

The company relented and agreed to divert 10 percent of operating profits to employee bonuses.

LG Electronics said on March 18 that it will raise salaries 9 percent, the largest increase in 10 years. Hyundai Motor is considering a pay increase.

"We're planning to increase salaries of researchers and white-collar workers who've been working for the company for eight years or less so that they can receive a higher bonus," said a spokesperson for Hyundai Motor.

Some 3,000 workers including factory workers criticized the announcement, arguing that they were excluded from the consideration.

Korean game and IT companies were first movers in the recent pay raise boom. In February, game developers Nexon and Netmarble announced that they will increase salaries by 8 million won ($7,080).

These companies are competing heavily for workers as the market is so hot and good talent is in demand.

Naver and Kakao held online conference calls with employees in late February and vowed to do their best to offer them the best compensation in the industry.

Young employees are most restless. They want transparency and equal treatment and are not afraid to express their views, though online and anonymously.

"They file too many complaints on every small issue," said one executive.

Experts say it's time for the companies to rebuild their management styles and improve the treatment of employees.

"The companies should learn how to communicate with the young employees and try harder to build transparency in their management," said Kwak Keum-joo, a psychology professor at Seoul National University.

"Those young people are not much interested in achieving long service or in the future of their companies," Lee said. "Companies must reconstruct their management styles so that they can focus on increasing performance by achieving flexibility in the labor market."