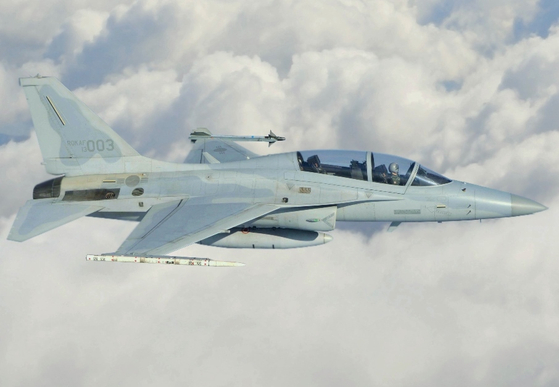 
Korea’s plan to sell its FA-50 light combat aircraft to Argentina is dead in the water after Britain, which manufactures parts for the planes, barred the sale on the grounds of a decades-old arms embargo.

Agustin Rossi, Argentina’s Minister of Defense, posted on his Twitter account Saturday a letter from Korea Aerospace Industries (KAI) informing the Argentinian Embassy in Korea that exports of six major components for the plane produced by British suppliers was blocked by London.

“Today, we have been told that Britain, which produces six components for the FA-50, has forbidden the sale [of the plane] to our country,” Rossi wrote in Spanish.

“A new example of imperialism.”

Britain’s refusal to sell weapons to Argentina stems from the 1982 Falklands War waged by the two countries over the Falkland Islands — called las Malvinas by Buenos Aires — in the South Atlantic. Argentina lost the war after incurring hundreds of casualties, but continues to assert its sovereignty over the islands.

While KAI’s letter to Buenos Aires noted the company would endeavor to resolve the export license issue, Britain’s move to block the sale may be the death knell for a contract that has been stymied by multiple hurdles since its conception.

The Argentinian Air Force first chose the FA-50 — Korea’s first indigenously built supersonic plane — as the preferred bidder in January 2017 as part of a program to modernize its outdated air fleet.

According to the Defense Acquisition Program Administration (DAPA), Korea’s arms procurement agency, preparations were underway to sell 12 of the jets for around $500 million later that year.

But financial problems in Argentina, which received a $56 billion loan from the IMF in 2018, jeopardized the plan, while Seoul hesitated to provide financial support to Argentina.

Determined to acquire the planes, Argentina went so far as to reduce the bid to eight planes. The country’s then-President Mauricio Macri reportedly expressed a keen interest in going through with the sale at a meeting with President Moon Jae-in on the sidelines of a G-20 meeting in Japan last year.

The onset of the coronavirus pandemic affected the plans further after Argentina was forced to reduce its defense budget. Negotiations effectively went into a standstill, according to industry sources.

The prolonged negotiating process over the planes, as well as Buenos Aires’ apparent insolvency, has fueled speculation that Argentina may be using the British embargo as an excuse to save face over its inability to fulfill the contract.

A DAPA spokesperson denied this however, noting the talks between KAI and Argentina remain “still in an early stage.”

“The issue of the British arms embargo must be solved between governments, but we are not at that stage yet,” the spokesperson said.

The FA-50, which belongs to the T-50 Golden Eagle family of supersonic trainer aircraft, first entered active service in the Korean Air Force in 2005. It has since been a relatively lucrative export item for the Korean defense industry, sold to the Philippines and Thailand, and once even considered by the U.S. Air Force for its next generation jet trainer program.