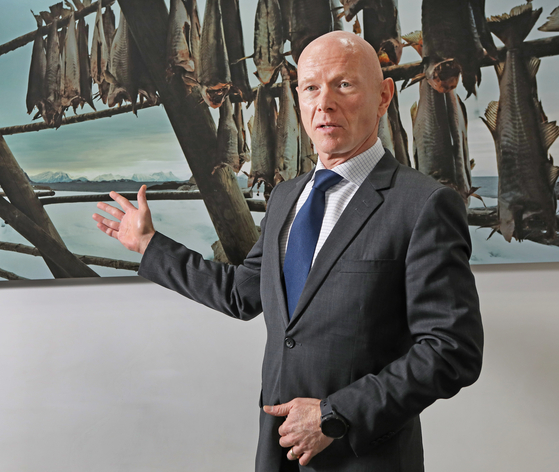 Frode Solberg, ambassador of Norway to Korea, speaks with the Korea JoongAng Daily about Norway-Korea cooperation on research in the Arctic region, at the embassy in central Seoul on Oct. 26. [PARK SANG-MOON]

Wintry mountaintops, shipyards and a love for seafood are just a few of the interests shared by Norway and Korea. But another topic, perhaps less known, also brings together the two distant nations.

“South Korea is one of our closest partners and we are working closely in an area that is perhaps not so well known, the Arctic,” Frode Solberg, ambassador of Norway to Korea, said during an online forum the embassy hosted on Oct. 19. “Today we highlight women’s contributions to research and understanding of the Arctic region, because we know that greater gender diversity results in more innovative outcomes.”

The forum, “Women in the Arctic” was held online on Oct. 19 by the Norwegian Embassy in Seoul, the Korea Polar Research Institute (Kopri) and the Korea Center for Women in Science, Engineering, and Technology.

Female scientists joining the forum from Norway and Korea shared their latest research on the Arctic region, oceans and fisheries, and said that more than once their research have led to collaborations between institutions from the two countries.

“My question of research was on how we could best implement international obligations and principles through the national laws,” said Guri Hjallen Eriksen of SALT, an independent consulting company that researches the sea and coast in Norway. “There was basically no research platform to build on, so I had to start at the basic level. And I wished to make the thesis relevant outside of Norway as well [...] Korea Legislation Research Institute agreed to collaborate with the University of Oslo’s department of public and international law, but for practical reasons we couldn’t make it happen.”

Also a Ph.D. candidate at the university, Eriksen said that Korea is often seen as a partner to Norway when it comes to collaborations on Arctic research and science. 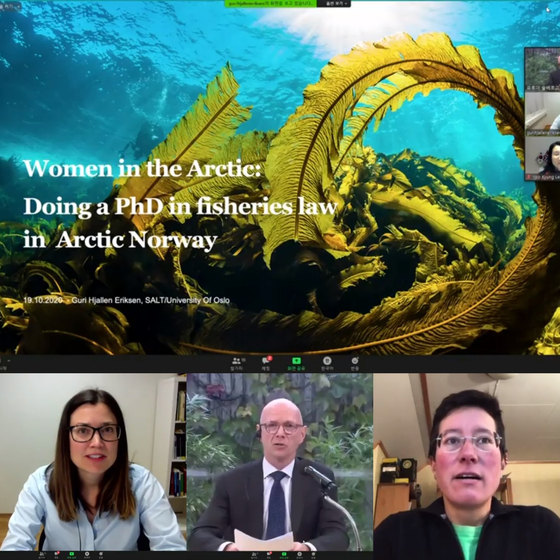 Screen capture of the "Women in the Arctic" conference hosted online by the Norwegian Embassy in Seoul, the Korean Polar Research Institute (Kopri) and the Korea Center for Women in Science, Engineering, and Technology on Oct. 19. [SCREEN CAPTURE]

Korea is one of the signatory nations of the United Nations Convention on the Law of the Sea, which it ratified in 1996, and is also signatory to the International Agreement to Prevent Unregulated High Seas Fisheries in the Central Arctic Ocean, alongside other Arctic and non-Arctic states such as Canada, Norway, China, Japan, the United States, Russia, Denmark, Iceland and the European Union.

But even on matters outside the Arctic region, Norway-Korea research collaboration is about to get bigger, the top Norwegian envoy to Korea said.

“Korea from January [2021] onwards will be among the prioritized countries in the Panorama strategy, which is important for us because it not only means that Korea is a preferred partner on cooperation, innovation and education, but it also means that it will be easier [for researchers, institutions and organizations in both nations] to apply for combined research activities,” Solberg told the Korea JoongAng Daily in an interview at the embassy on Oct. 26.

The Panorama Strategy was adopted by the Norwegian government in 2016 to boost cooperation on higher education and research. Current signatories include Brazil, China, India, Japan, Russia and South Africa.

Korea, Canada and the United States will be joining in January 2021.

“It comes as a natural continuation of last year’s state visit but also the visit by our minister of research and higher education in November last year,” Solberg said. “We signed an MOU on closer cooperation on research activities and this is a concrete result in the closer cooperation in this area that we have seen for some time now.” 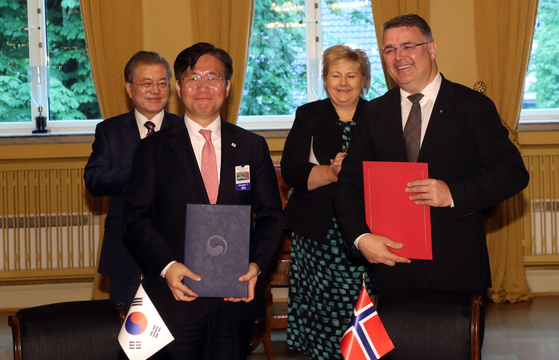 During Korean President Moon Jae-in's visit to Norway in June 2019, the governments of Korea and Norway signed an agreement on cooperation on hydrogen economy and low-carbon technologies. President Moon, left in second row, and Norwegian Prime Minister Erna Solberg, right, in second row. [JOINT PRESS CORPS OF THE BLUE HOUSE]

Norwegian and Korean scientists gathered for the conference on Oct. 19 also shared their personal experiences about working with each other across oceans.

“I had an opportunity to recommend Korean students for a program of research in Norway,” said Lee Yoo-kyung, a senior researcher at Kopri. “The program director in Norway asked me if I could recommend an equal number of male students and female students. It left a strong impression on me. Gender equality in the field of science, especially in the polar regions, is something we’re all striving for.”

Since the Nobel Prize was established in 1895, there have been a total of 962 laureates. Of them, only 53 were women.

“This year, four women were added to that roster,” Solberg said. “But the awards still lack diversity. That is why we believe it is important to elevate their visibility and contributions to research. There are many good examples of women in fields of research today — there are two women, one from Norway and another from Canada, who are spending nine months alone in the high Arctic to collect data on climate change.”

Hilde Falun Strom and Sunniva Sorby moved into a cabin in Svalbard in August to record data on how climate change is impacting the Arctic ecosystems.

“Like them, there are a number of very dedicated and engaged and extremely well-educated women in the field,” Solberg said. “We wanted to show the public in both Norway and Korea their latest work, and also motivate the students and young professionals who were watching the webinar to show a possible career path for them.”