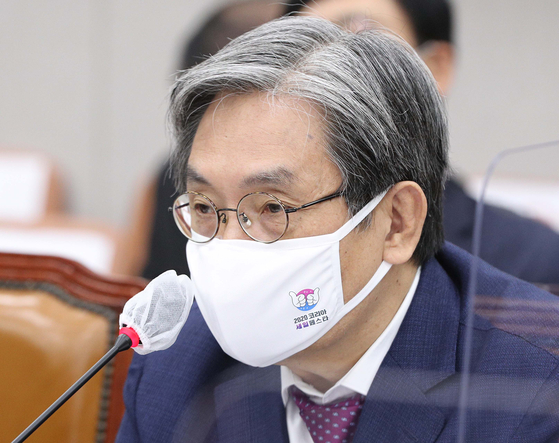 Presidential Chief of Staff Noh Young-min answers a lawmaker's question at the National Assembly's audit on the Blue House on Wednesday. [YONHAP]


The main opposition party on Thursday demanded Presidential Chief of Staff Noh Young-min step down after he called the organizers of antigovernment rallies in August “murderers” for causing clusters of Covid-19 infections.

“Holding rallies to criticize the government for its failed policies and broken promises is the people’s right,” Rep. Sung Il-jong of the People Power Party (PPP) said Thursday. “After we criticized the police’s attempt to stop the people, Noh brazenly called the rally organizers murderers.”

“If you are not on the side of the administration, they treat you as the enemy,” she said. “It is frightening to see a government that acts as if it does not need the people unless they are its supporters.”

Kim said the administration has no right to attack the people, since it is also responsible for many disasters. She said the government left the country open to travelers from China amid the pandemic and failed to denounce Pyongyang when North Korea shot and killed a South Korean fisheries official. “And yet, it is expressing its rage toward its own people,” she said.

Kim called Noh unqualified to serve as presidential chief of staff. “He doesn’t deserve the post,” she said.

During the National Assembly’s audit of the Blue House on Wednesday, Noh responded angrily to a PPP lawmaker’s criticism that the police had moved to shut down the protesters during the Aug. 15 rallies.

After Rep. Park Dae-chul showed a photo of the police officers confronting the protesters, Noh complained that a lawmaker was defending illegal rallies.

“More than 600 people were infected by Covid-19 at the unauthorized rallies on Aug. 15, and seven of them died,” Noh said. “Organizers of the rallies are murderers.”

After the session resumed, Noh issued a brief apology. “I went too far,” he said.

Other PPP lawmakers continued to attack him as the audit continued late at night.

“If the rally organizers are murderers, the government officials who did not stop the incoming travelers from China are also murderers,” said Rep. Kwak Sang-do.

“That seems a far-fetched argument,” Noh responded. “The rallies were illegal. How can you compare the two situations?”

On Thursday, Rep. Yoon Hee-sook of the PPP also posted a message on her Facebook account to criticize the Blue House.

"The rallies deserved criticism because participants largely ignored the government’s social distancing policy, but the Blue House should have not called them murderers," Yoon wrote. “This shows clearly how the Blue House is dividing the people between its friends and foes."