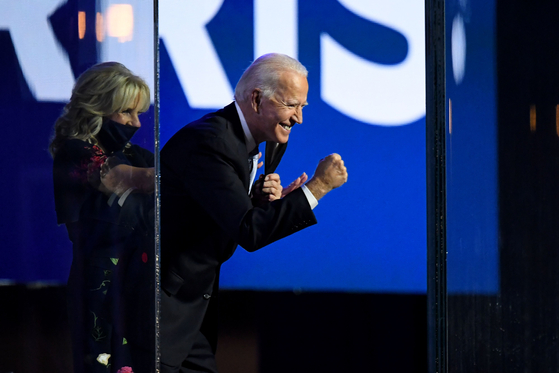 U.S. President-elect Joe Biden and his wife Jill Biden salute the crowd on stage after delivering remarks in Wilmington, Delaware, on Nov. 7. [AFP]


Economists and corporations in Korea are scrambling to predict what Joe Biden’s win in the U.S. presidential election will mean for the local economy as the president-elect’s multilateral approach will likely usher in more favorable trade conditions.

The new Biden administration poses less uncertainty than does the outgoing Donald Trump administration in international trade, and the new environment will increase the overall export volume for Korea and globally, the Korea Chamber of Commerce and Industry (KCCI) said in a statement on Sunday.

“Now that there is less possibility of inconsistency or abrupt changes in the international trade order, global trade will likely prosper again,” said Jeong Hyeok, an advisor at the lobbying group and a professor at Seoul National University's (SNU) Graduate School of International Studies.

Hyundai Research Institute projected that under the new presidency, the volume of Korean exports could increase by 0.6 percent through 2.2 percent annually compared to a 0.4 percent growth with the incumbent Trump administration.

As for the effect on gross domestic product, the new policies from the incoming Democrat-led administration could contribute to bringing about 0.1 percent to 0.4 percent growth for Korea, compared to 0.1 percent or less from the Trump administration.

By industry, electric vehicle (EV) battery makers with their manufacturing bases in the United States could benefit from the Biden-led government’s push to address climate change and champion clean energy.

“We could expect more exports in the clean energy sector because demand for rechargeable batteries, solar power and electric vehicles will likely soar,” said Korea International Trade Association on Sunday in a statement.

Biden has said that his government would invest $1.7 trillion over the next 10 years to advance manufacturing, high-speed rail, electric cars, renewables and a lot more to become a clean-energy “superpower."

Korea is home to the world’s largest EV battery maker LG Chem and other leading manufacturers including SK Innovation and Samsung SDI.

LG Chem, which will spin off its battery business next month, operates an EV battery plant in Michigan and has started constructing its second plant in Ohio earlier in the year in a joint venture with GM.

SK Innovation is extending its battery plant in Georgia with the aim of boosting its capacity to 100 gigawatt-hours by 2025.

Still, all three battery makers saw their stock prices shoot up on Friday when Biden began to take the lead in key swing states.

“The U.S. market for clean energy and the environment will further grow,” said Hong Jong-ho, a professor at SNU’s Graduate School of Environmental Studies who doubles as an advisor for KCCI.

“Solar and wind-powered energies, in particular, will enjoy a hike in demand,” he said.