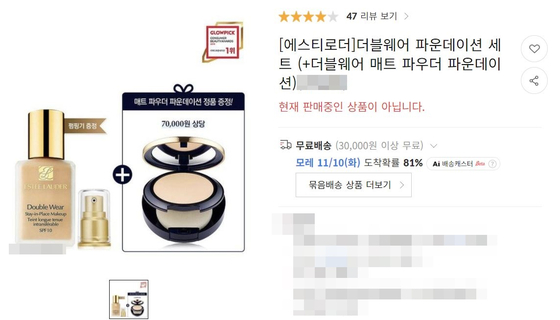 
New York-based cosmetics giant Estee Lauder came under fire over the weekend after one customer claimed the company shipped her the wrong color foundation with a note saying that the one she had ordered "does not go well with Asian skin tone."

An Estee Lauder official has since apologized, but said that it is still investigating how the incident happened.

An anonymous customer posted a review Sunday on the e-commerce site 11st, claiming Estee Lauder changed the color of the foundation they ordered. The unidentified individual added a photo of a printed note that came with the foundation, presumably added by an Estee Lauder employee.

“The color of the matt powder [you chose] is a specific one that does not go well with Asian skin tone which had a strong mixed reaction from customers,” read the typed note taped to the product. “Since you could not test it out in store, we sent a color that is a better fit for our Asian consumers. Should you be unhappy with the change and the product, please let us know and we will refund you.”

The customer shared a picture of the note online to warn others who were “considering purchasing products” from the company. 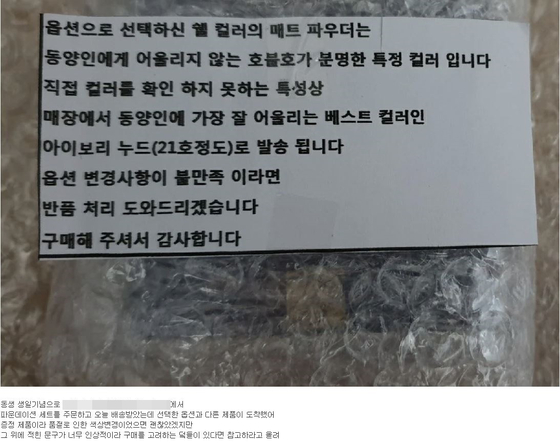 A post from a customer who received the wrong product from Estee Lauder with a note saying it was more appropriate for Asian skin. [CHU IN-YOUNG]


The typed note included with the product was unsigned, and it's unclear whether it came from an Estee Lauder representative or was included by somebody else.

The product in question was a giveaway powder-type foundation that came along with Estee Lauder’s Double Wear liquid foundation. Customers were allowed to choose the color. It was sold from an Estee Lauder physical store in Shinsegae Department Store’s Gangnam branch in southern Seoul and made available through 11st, according to a spokesperson from the department store.

The cosmetics company said it’s taking the matter seriously and added it will “strengthen staff training to prevent similar problems from occurring in the future."

Amid mounting criticism online, Estee Lauder took down the product from the website, a spokesperson from 11st said.

11st and Shinsegae Department Store refused to comment on the matter, saying that they only provide the online and offline platforms through which the product is sold.

This is not the first time Estee Lauder has gotten in trouble for sending an inappropriate message with a product. In December 2017, a Chinese customer with the Twitter handle Xintong reported that she received a printed note saying "FCK U" with her Estee Lauder products, instead of the "Love you mom" she had requested.

Estee Lauder said there was an “error” in the system in an apology e-mail to the customer.

Health and cosmetics exports boom in 2020