Moon and others congratulate President-Elect Biden

Moon and others congratulate President-Elect Biden 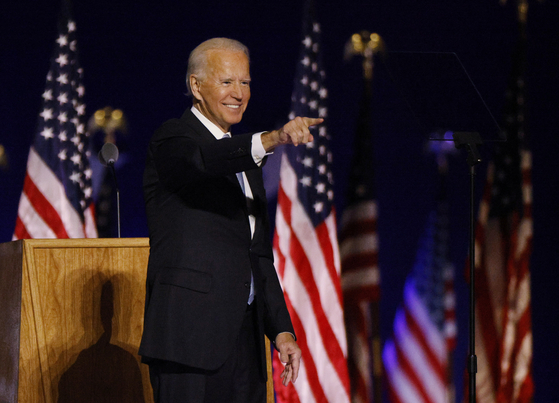 Joe Biden points to the crowd at his election rally in Wilmington, Delaware, Saturday, after the news media announced he won the 2020 U.S. presidential election over Donald Trump. [REUTERS/YONHAP]

“Congratulations to @JoeBiden and @KamalaHarris,” Moon wrote on Twitter in Korean and English, referring to the new U.S. president-elect and vice president-elect.

“Our alliance is strong and the bond between our two countries is rock-solid. I very much look forward to working with you for our shared values. I have great expectations of advancing and opening up the future development of our bilateral relations. Katchi Kapshida!”

“Katchi kapshida” means “let’s go together” or “we go together,” a frequently used catchphrase of the South Korea-U.S. alliance.

Congratulatory messages for Biden also poured in from the National Assembly, as Chairman Lee Nak-yon of the ruling Democratic Party (DP) wrote on Facebook Sunday that he hopes to see the Korean Peninsula peace process resume, and for “permanent peace” to be quickly established in the region.

DP Rep. Song Young-gil, head of the parliamentary Foreign Affairs and Unification Committee, said he’s planning to visit the United States later this month with his party’s Korean Peninsula task force to discuss peninsular affairs with Washington officials, after which he will visit the United States again next month with a team of bipartisan lawmakers on the Foreign Affairs and Unification Committee.

The visits will be part of Seoul’s efforts to “create a framework of close communication and cooperation” between the parliaments of South Korea and the United States, Song said.

According to a source from the ruling party, the DP is planning to commence talks on separately sending some members of its Supreme Council to the United States, though a date was not given. A possible visit may come on the heels of Lee’s pep talk last Friday during a Supreme Council meeting, in which he said it was crucial for the party to forge connections with the new U.S. administration within the first 100 days, when key policies and agenda items for the next four years are reviewed.

Lee, during the Supreme Council meeting, added it was important to “fine-tune” both countries’ stances on issues pertaining to the Korean Peninsula.

The main opposition People Power Party (PPP) also congratulated Biden on his victory Sunday, saying in a statement that the South Korea-U.S. alliance was forged on the battleground during the 1950-53 Korean War, and that Seoul will follow Washington’s path in becoming “a responsible leader” in the international society.

“The role of America, the economic powerhouse, is more important than ever before,” the Korea Chamber of Commerce and Industry said in a statement. “We hope that the bilateral relations on economic cooperation and security will strengthen.”

The Federation of Korean Industries echoed the sanguine sentiment, saying that it expects the Biden government to advance multilateralism in the international community.

How Biden will approach North Korea’s denuclearization issue remains to be seen, but many local experts believe he will opt for a bottom-up approach that starts with working-level talks and build its way up to a summit, as opposed to his predecessor Donald Trump, who pursued a top-down approach.

Biden already hinted at tougher conditions for a meeting with North Korean leader Kim Jong-un during a televised debate with Trump on Oct. 22, during which he said Kim would have to “agree that he would be drawing down his nuclear capacity” first.

“The U.S. and its allies need to coordinate responses to North Korea’s upgraded long-range and submarine-based missiles,” warned Leif-Eric Easley, an associate professor of international relations at Ewha Womans University in Seoul.

“Pyongyang’s next move may be to conduct a provocative test as a ‘welcome gift’ to Biden before demanding financial benefits to reduce military tensions,” Easley said.