Artist Park Rehyun steps out of her husband's shadow and shines

Artist Park Rehyun steps out of her husband's shadow and shines 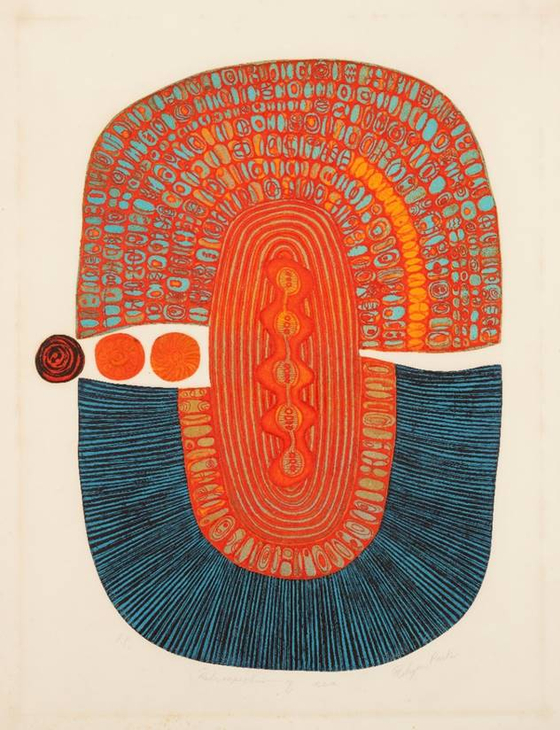 "Retrospection of Era"(1970-73), which shows artist Park Rehyun's printing techniques and aesthetics, is part of her large-scale retrospective at the National Museum of Modern and Contemporary Art (MMCA)'s Deoksu Palace branch in central Seoul. [MMCA]


When it comes to iconic artist couples, art lovers might first think of the Mexican artists Frida Kahlo and Diego Rivera.

In Korea, there is an artist couple as important as Kahlo and Rivera in the context of the country’s modern art history. They are Park Rehyun (1920-1971) and Kim Kichang (1913-2001), who both developed Korean modern art based on traditional East Asian painting techniques and materials, in different ways from each other.


However, unlike Kahlo who has now become even more famous among the public than her husband, Park is most well known as “the wife of the art master with a hearing impairment Kim Kichang,” despite the fact that she's won many awards and her paintings have appeared in middle and high school textbooks.

The retrospective, which features 138 works of Park including paintings, tapestries and prints, is divided into four parts in a roughly chronological order. The first part titled “Modernism in Korean Ink-wash Painting” focuses on how Park’s art evolved from Japanese-style paintings with rich colors during her study in Tokyo in the 1940s to paintings of thin Korean-style coloring with Cubism-influenced forms and compositions in the 1950s after the liberation of Korea from Japanese colonial rule. 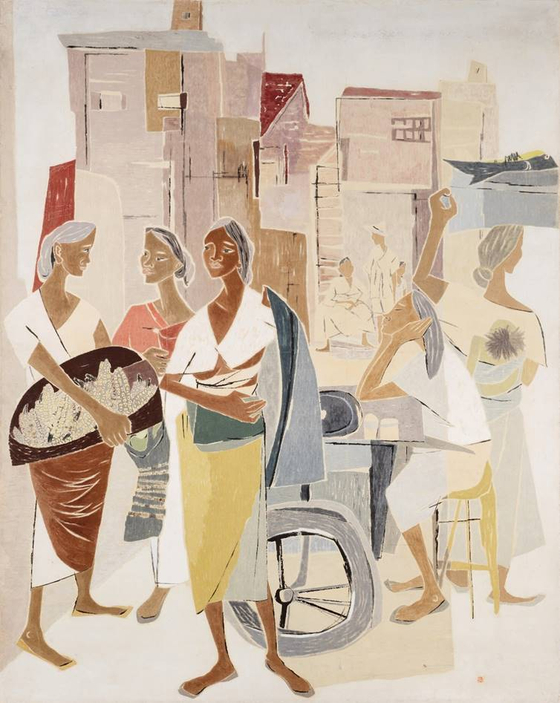 
“The painting ‘Make-up’ for which Park won the Governor’s Award in 1943 shows that her techniques were already completed in her early 20s,” curator Kim Ye-jin explained. “However, after the liberation, she felt the necessity to overcome the Japanese influence. She found a breakthrough in [the Western art movement] Cubism. ‘Early Morning’ and ‘Open Stalls,’ for which she won Presidential Awards in 1956, show her success in combining traditional East Asian painting styles with elements of Cubism.”

The second part titled “Balancing Art and Life” features Park’s paintings related to everyday life and her family — her husband Kim and four children, as well as her essays published in women’s magazines, in which she talked about her difficulties of living as an artist and a married woman with children at the same time and how she balanced it all.

“Kim loved Park very much and he would take on some domestic work and childcare duties, which was an exceptional case at that time [in the very patriarchal society of the mid-20th-century Korea],” said Shon Sung-ye, president of Chung Jark Gallery in southern Seoul. She helped the MMCA contact the Park-Kim couple’s son Wan living in Chicago so that the museum could exhibit some works owned by him including two drawing books. The gallery last week started an exhibition of the Park-Kim couple that focuses on small paintings and prints owned by the son. 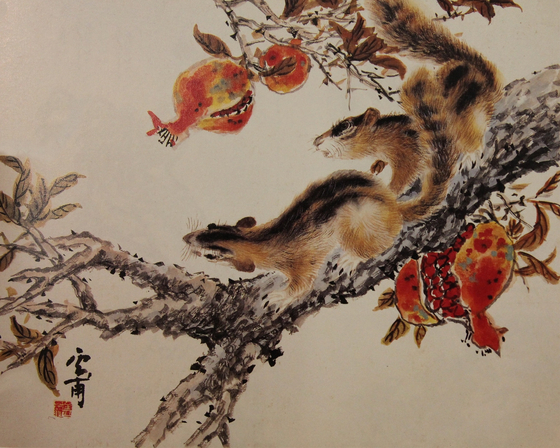 “Pomegranates and squirrels”(1969) by Kim Kichang. He painted it as a gift for his wife Park Rehyun and she treasured it until her death. The painting, now held by their son, is on view at Chung Jark Gallery in southern Seoul as part of the couple's exhibition. Although this painting is of a very traditional style, Kim showed his mastery of various styles including abstract art through his oeuvre. [Chung Jark Gallery]


Although Kim was a less patriarchal and loving husband, housework and childcare were mainly Park’s share under the tacit rules of that time. “So Park had to find her painting motifs from everyday life and create works at night at the cost of her sleep,” curator Kim said, pointing out her paintings of still life and of owls on view in Part 2 of the exhibition.

“In addition, Park always accompanied her husband for outside activities due to his hearing impairment,“ curator Kim continued. “Watching this, Korean society and media began to promote her as the paragon of a devoted, cultured wife. Park compromised and fulfilled the demand of society.” 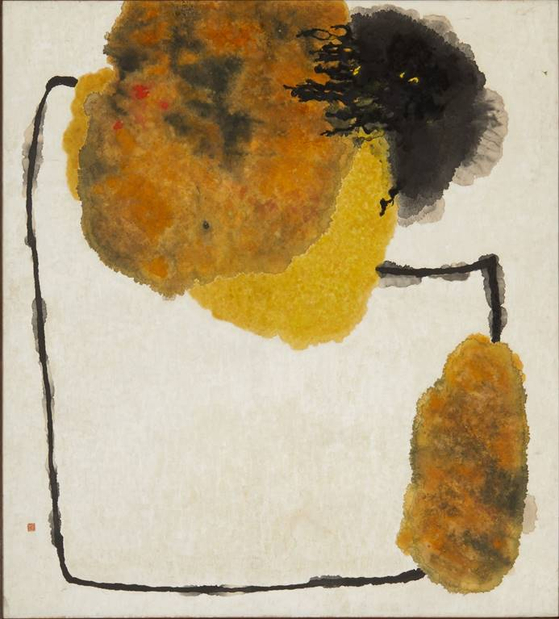 
Part 3 titled “International Travel and Abstract Art” starts with Park’s abstract paintings with traditional East Asian pigment, which she experimented in the early 1960s under the heavy influence of Informalism or Art Informel, the French movement of gestural abstract art.

And there are her drawing books of ancient relics. Since 1964, when Park and Kim had a joint exhibition in Honolulu, Hawaii, she traveled around the world with her husband and was inspired by artifacts of various cultures including American native art pieces. The inspiration brought about unique tapestry works and a new series of abstract paintings characterized with the use of three colors — red, yellow and black — and patterns commonly found in ancient crafts around the world. They are also on view in Part 3. According to the museum, Park said yellow symbolizes the sun, red representing human life and black the historical era.

The fourth and last part, “Printmaking and New Techniques,” features the new print and tapestry techniques the artist mastered in her later years. After traveling around Latin America upon her participation in the 1967 São Paulo Biennial, she went to New York to study prints in depth for seven years, while her husband remained in Korea, caring for their children. 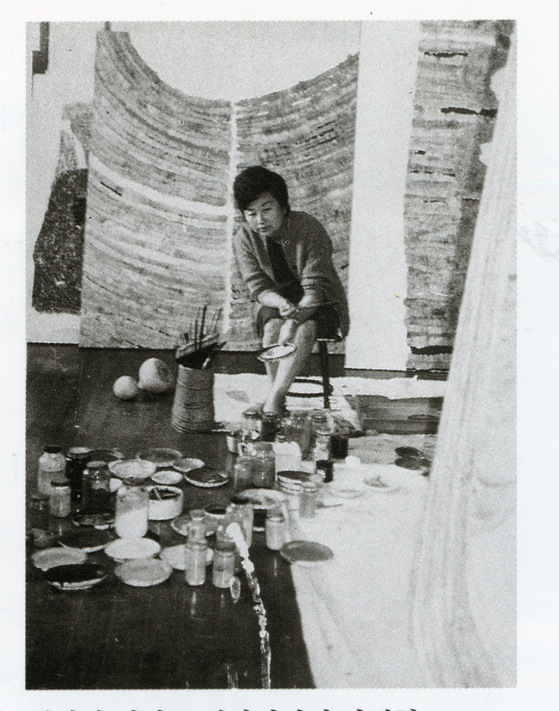 
“She created the tapestry works in the 1960s, when textile art as a modern art genre was in its nascent stage even in Western countries,” curator Kim said. “And she created unique prints in the 1970s, when little was known about copperplate printing in Korea.”

Park returned to Korea in 1974 and held a print exhibition that took the Korean art scene by surprise, but in January 1976, her career ended abruptly with her unexpected death due to liver cancer.

“The exhibition title of ‘Triple Interpreter’ is an expression the artist once used to describe herself,” said the curator. “During her trip to the United States, she would interpret the travel guide’s English explanation into Korean and then into gestures and lip movements for her husband. To their travel mate and essayist Moh Younsook, amazed by that scene, Park allegedly said that she’s like a ‘triple interpreter.’ For this exhibition, the definition was stretched to cover the artist’s broad oeuvre that links and traverses the boundaries of painting, tapestry and print.”

The MMCA retrospective runs through Jan.3, 2021. Admission is free but the museum is inside Deoksu Palace, which charges an admission of 1,000 won ($0.90).