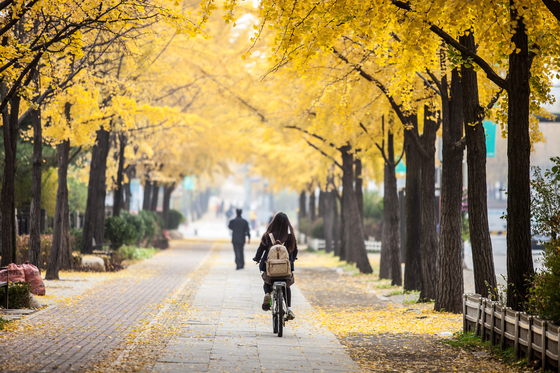 You can fail to see the value of something when it’s too abundant — just like gingko trees. Gingko trees are the best example of a living fossil plant, dating back about 300 million years to the so-called Paleozoic period before dinosaurs appeared on the planet. Trilobites, which never fail to appear in earth science textbooks, lived at the same time as gingko trees. Even though trilobites are extinct, gingko trees survived.

Gingko trees are a lonely species, as they are the only surviving species in their division. In the plant kingdom, Gingko trees belong to the single division, class, order, family, genus and species of ginkgo. They’re classified as an endangered species, as the wild population has dwindled.

Ginkgo trees most commonly grow in Korea, China and Japan. They could survive in Korea thanks to the golden yellow leaves in autumn and are a popular choice of roadside trees for their unique yellow color. The city of Seoul designated ginkgo trees as the symbol of the city on April 3, 1971. The fossil plant can fight off most pests and diseases. Just like most other plants, gingko trees are giving. They are used as a material for luxury furniture in Korea due to their fine grain and the rings on the wood. A research project using a gingko extract to develop a dementia cure is in progress.

Some of the trees exude a foul smell, but that has a story. The unpleasant smell comes from the fruit to be prevented from being eaten. There is also a theory that the tree chose to have the strong smell to become dinosaur food, and in turn help with the plant’s reproduction. The theories are quite convincing. Gingko trees must not have predicted that they would be used as street trees or bar snacks. Lately, the smell is increasingly disappearing, as local governments are replacing female trees with male ones.

When you walk down the street and smell gingko trees, think about dinosaurs, and you’ll feel much better. You’ll actually think it is understandable. The season of foliage and falling leaves makes you want to deepen your understanding of people and trees.

Think over your raison d’être