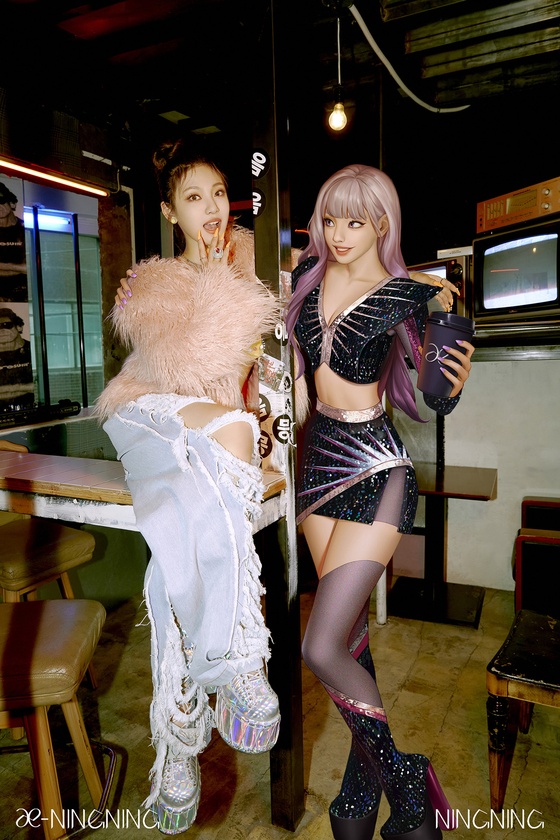 
While today's world seems far from being dominated by artificial intelligence (AI), in pop culture, a new chapter is signaling a sphere in which humans and those who exist solely in the digital realm appear hand in hand.


SM Entertainment’s newest girl group aespa will make an official debut with the release of its single “Black Mamba” on Nov. 17 with four members; Karina and Winter of Korea, Giselle of Japan and Ningning of China. The news of the group's launch came as a surprise not only because it’s the first girl group to come from SM Entertainment in six years after Red Velvet, but also because the teaser videos showed “avatars” of each member: ae-Karina, ae-Winter, ae-Giselle and ae-Ningning.

“I thought my heart was going to burst when I first received a ‘synk message’ from ae-Karina,” said Karina in a teaser video uploaded on Nov. 4, where she sat down with her avatar “to reminisce back to when they first met,” according to the agency. 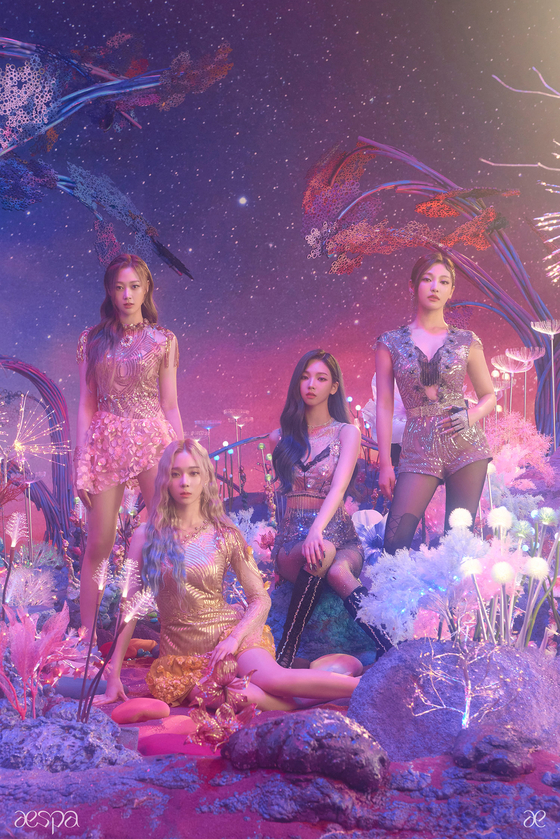 Winter of aespa, left, and her avatar ae-Winter. [SM ENTERTAINMENT]


The concept of aespa is still somewhat confusing. The group, whose name is a mashup of the term “Avatar X Experience” and the word “aspect” to signal that the group has two aspects to it, will debut under the concept that the members and listeners will get to experience a new world through the members’ avatar personas.

“Members in the real world and members in the virtual world share an AI brain that will allow them to meet with each other in the digital world and talk to each other and help each other by sharing information about their respective worlds,” Lee Soo-man, the head of SM Entertainment, said while introducing the group at the World Cultural Industry Forum held on Oct. 28.

“Humankind is going through a dynamic change in lifestyle due to the technological revolution. The future will be all about celebrities and robots. And with our new girl group, we open up the doors to a new future in entertainment.”

The content to come from the group will be both online and offline — sometimes separately and sometimes simultaneously. The idea is that the real life members are connected to their ae-counterparts, but they are separate beings who sometimes collaborate in various ways. SM Entertainment asked people to stay tuned for what’s to come.

Virtual girl group K/DA released an album titled ’All Out“ on Nov. 6, following the success of ’Pop/Stars″ (2019), which has garnered 390 million views on YouTube as of Nov. 10. [RIOT GAMES] 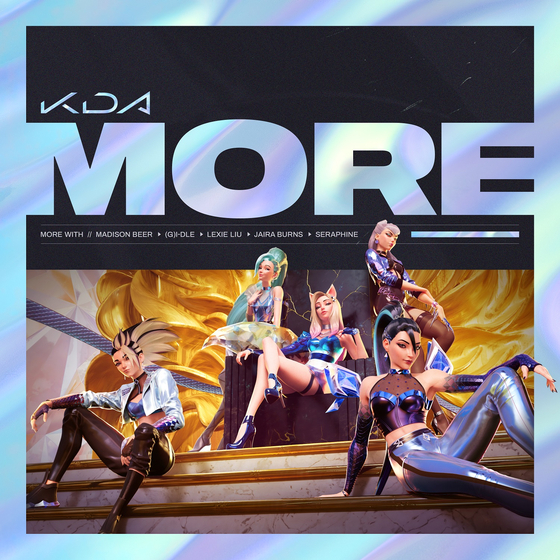 Virtual girl group K/DA has released an album titled ’All Out“ on Nov. 6, following the success of ’Pop/Stars″ (2019), which has garnered 390 million views on YouTube as of Nov. 10. [RIOT GAMES]


The novelty of aespa’s new concept may seem strange to some, but the idea of having virtual characters or avatars for singers isn’t actually that new, although aespa marks the first for a K-pop girl group. In fact, there’s a virtual girl group that’s been topping charts since 2018.

Named K/DA, the girl group consists of four members: Ahri, Akali, Kai’Sa and Evelynn. Those who are familiar with the world of gaming will instantly recognize these names as the characters from the popular online game League of Legends (LoL). The group made a stunning debut on Nov. 3, 2018, during the congratulatory performance for the League of Legends World Championship finals held in Incheon, performing its track “Pop/Stars” for the first time. While singers Miyeon and Soyeon of girl group (G)I-DLE, Madison Beer and Jaira Burns were the ones performing on stage, the official performance video uploaded on YouTube features not only the real-life singers, but also the digital images of the four members of K/DA.

As of this month, the official music video for “Pop/Stars” has garnered 390 million views on YouTube.

Following the success of “Pop/Stars,” K/DA released a single “The Baddest” in August and an album titled “All Out” on Nov. 6. The four singers have joined forces once again for the new lead track “More,” along with Lexie Liu whose voice has been featured for the character Seraphine. The music video has accumulated 32 million views since it was released on Oct. 28, although reactions from listeners in the comment section have been mixed.


While some applauded the song, describing it as “crazy,” for example on a comment with 245 likes, another comment with over 2,000 likes read, “I actually can’t handle this, bye.”

Korea's first cyber singer Adam, who debuted in 1998, was also met with uncertainty. The 3-D animation was created by a company named Adamsoft, in the hope that the new technology would heighten Korea's image in the world, before the onset of Hallyu, or the Korean Wave. While Adam's first album in 1998 garnered interest, his second that was released in 1999 didn't do as well, as other cyber characters were gaining popularity and people simply lost interest.

K/DA is a success model that has proven popular among not only game users but also the general public, which could lead to the success of aespa — or not. K-pop has always readily made use of the latest technology, and SM Entertainment has never hesitated to stand at the forefront and experiment; as evidenced by the "Beyond LIVE" online concert series that took place earlier this year, or the "supernatural powers" concept that boy band Exo debuted with.

The use of avatars in its newest girl group can be seen as part of Lee's philosophy to bring together culture and technology, but it's not very likely that fans will "dig" the virtual members as much as real humans, according to Professor Lee Gyu-tag of pop music and media studies at George Mason University Korea.

"An important aspect of K-pop is human interaction," said Lee. "Fans feed off of the individual personalities of stars and it's not likely that they will be able to engage deep enough in avatars to become ardent fans. The idea of having avatars will probably benefit the group by attracting a lot of attention prior to debut, but just as Exo gained popularity because of who they are as people and not because of the band's superpowers concept, if aespa does succeed, it won't be because of the avatar members."

Another factor that must be taken into account is the ethics. Virtual characters will be able to do so much more compared to humans, who are bound by time, location, money and many other restrictions, but the issue of responsibility also comes into question, according to Kwak Keum-joo, a professor of psychology at Seoul National University.

“Virtual characters will be able to do whatever we wish and even expand our creative possibilities because they’ll be able to do things that we can’t,” said Kwak. “But because they’re fictional characters, we can’t hold them liable for their actions. For instance, if a character does something immoral or illegal, then it’s difficult to hold them responsible for it, because holding them to human standards will be a fuzzy area. Both outcomes are possible depending on which direction we go in.”