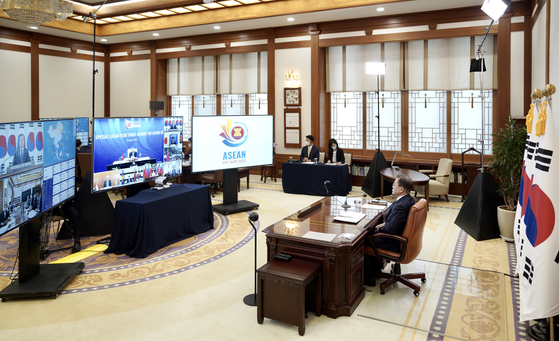 In this file photo, President Moon Jae-in participates in the virtual summit of the Association of Southeast Asian Nations (Asean) with Korea, Japan and China at the Blue House on April 14, 2020. [YONHAP]


President Moon jae-in will participate in a series of virtual summits related to the Association of Southeast Asian Nations (Asean) this week, the Blue House said Tuesday.

According to presidential spokesman Kang Min-seok, Moon will join five virtual summits organized by the organization from Thursday through Sunday.

On Sunday, he will also sign the Regional Comprehensive Economic Partnership (RCEP), a free trade agreement among 15 countries in the region.

The RCEP comprises the 10 Asean members, along with Korea, China, Japan, Australia and New Zealand. The free trade pact will cover one-third of the global population, and Kang described it as a new opportunity for Korean people and companies.

India said last year that it would not participate in the trade pact due to concerns that opening up its market would increase its trade deficit with China.

According to the Blue House, Moon will announce an expansion of his New Southern Policy, launched three years ago, to advance cooperation with the regional association.

The expanded strategy will include seven agendas including comprehensive cooperation in public health and sustainable trade and investment, while taking into account the changed policy environment triggered by the Covid-19 pandemic and new cooperation demands from Asean countries.

A video summit with the five Mekong River nations — Vietnam, Cambodia, Myanmar, Laos, and Thailand — will take place on Friday. The first summit between Korea and the group took place in 2019 in Busan.

The Asean Plus Three (APT) summit is scheduled for Saturday. In addition to the 10 Asean countries, Korea, China and Japan are members of the APT.

“At the EAS meeting, Moon will explain the government’s diplomatic efforts to make a tangible progress in complete denuclearization and establish a permanent peace regime on the Korean Peninsula,” Kang said. “He will seek the international community’s continuing supports.”

Kang said this year marks the 10th anniversary of Korea’s strategic partnership with the Asean. Moon has visited all 10 member countries since he took office and hosted special summits in Busan last year to develop special ties with the Southeast Asian region, Kang said.

It is the first time in seven months for Moon to participate in a multilateral summit. Moon participated in a special virtual summit of the Group of 20 in March and a special APT summit in April to discuss efforts to fight the Covid-19 pandemic.

Vietnam was supposed to host the Asean-related meetings this year, but the summit instead went virtual due to the pandemic.

Asean-Korea forum to be held Wednesday at Shilla Seoul

Korea-Asean forum is bullish on RCEP